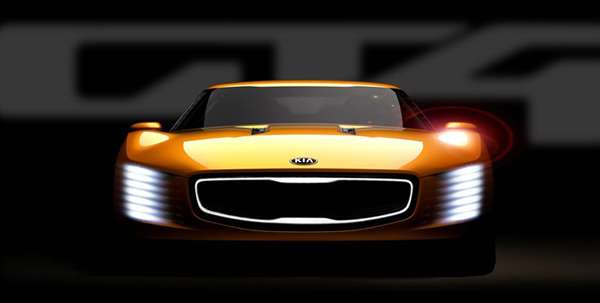 Kia has named the new concept car it is unveiling at the North American International Auto Show in Detroit on Jan. 13 the Kia GT4 Stinger as well as revealing details about its horsepower. Its name is old news to TorqueNews.com readers.
Advertisement

Back on Dec. 22 we told you the name of the new Kia concept car. I'd like to claim it was old-fashion sleuthing and there was an inside source who leaked the news. However, it wasn't so nefarious. Kia itself leaked the news on its own Facebook page – apparently by accident. No other sites picked up on it in the United States before TorqueNews.

Here's the official statement from Kia in its entirety, "Kia faithful will immediately notice the latest iteration of the signature grille resting mere inches from the ground. The surround glows white and is flanked by vertical LED headlamps. Front-brake cooling vents funnel air around custom 20-inch wheels. A carbon fiber front splitter mounted below the bumper provides added downforce for the car and keeps the GT4 Stinger’s front tires firmly planted to the tarmac.

"Under the hood you ask? A turbocharged 2.0-liter that pumps 315 horsepower to the rear wheels.

Consider that in the stupid fast category, especially for a Kia.

But will the Kia GT4 Stinger be built? As we reported back in December, "it could all mean nothing, too, to be frank. At the 2013 Chicago Auto Show, Kia introduced the Cross GT Concept CUV. To date, there has been no production news on that model."

This car, though, gets us really excited. Kia has been working hard in the last few years to be the sporty alternative to its sister company Hyundai. This could be just the vehicle to accomplish that. It would simply decimate anything Hyundai has to offer, including the current generation Genesis coupe. (A new model is rumored to be unveiled sometime in 2014.)

The rest of what's coming is pure speculation. As posted in an earlier preview of the Kia 2+2 sports concept, "Conceived at the automaker’s U.S. design studio in Irvine, CA, this stunning 2+2 sports car is intended to turn heads while delivering superb driving enjoyment on both road and track."