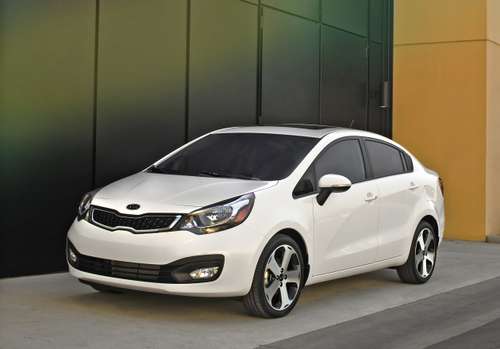 The hot spot in the automotive world right now is the B class or sub-compact segment as most folks know it. Sweet in that hot spot is Kia with the 2012 Rio five-door hatchback currently in dealers and the four-door sedan that rolls out by year’s end. The base 2012 model has the same price as the 2011 model but much more value.
Advertisement

Kia is currently on a strong sales run with deliveries up 13 straight months. Its sales in 2011 are up 37 percent over 2010, which is more than three times the industry average. Its market share is up to 3.9 percent from 3.1 percent in 2010.

It’s enjoying this sales success because of vehicles like the 2012 Kia Rio. Consumers don’t want cheap cars. They want good cars that are inexpensive. It’s a huge difference that Honda, for example, isn’t quite getting. As one Kia exec put it during a product launch in Austin, Texas, “Value is the new cool.”

OK, let’s be frank. The 2012 Kia Rio is not cool to look at it but it has some nice lines on the side and hood. The optional LED taillights are pretty. Little in the B class is cool on the outside but where the Rio might capture your fancy is under the hood and on the inside. That’s where the subcompact begins to shine.

As Ralph Tjou, manager of Kia’s car product planning put it, “We’ve changed just about everything in the new Rio [including its] pedestrian styling. The 2012 Rio is no longer about driving in a penalty box. It’s about riding in a box suite.” Maybe that’s just a touch of hyperbole but this Rio is a vast improvement where it counts.

As Tjou pointed out, the top reasons people reject small cars are design and technology. The exterior design is good but the interior design is what is going to capture people’s attention. People buy cars with their eyes initially but they have to live with the interior for years to come.

The interior space has been bumped up. At 6’1” tall, it’s normal for me to have to slide the seat all the way back. Not so in the 2012 Kia Rio, where I actually had to click forward a couple spots or use the telescopic steering wheel for the right hand position. (Quick tip – your wrists should be able to rest on top of the steering wheel for best handling.)

Kia has redesigned the HVAC controls so they are toggles. It’s a nice concept but the plastic switches do feel a little cheap. Time will tell how they stand up to constant use. Frankly, I’d be a lot more concerned about this on an older Rio, which was transportation at its most basic.

Saving gas is always cool, even with gas prices dropping recently. Keep in mind, though, prices are still high. For some reasons, Americans have short-term memory problems when it comes to gas prices. We all panicked when gas cracked the $3 a gallon threshold and again when it jumped above $4 but now we seem accepting of $3.50 and we’re not focusing on fuel economy.

Your fuel economy can improve with the optional Eco package that includes the idle, stop and go (ISG) feature. It basically shuts off the engine when you stop. It’s noticeable when it happens (at least it was on the model I drove). Expect the ISG to improve your fuel economy by about 10 percent in city driving.

Pricing for the 2012 Rio 5-door subcompact hatchback begins at $13,600, while the Rio 5-door with automatic transmission starts at $14,700 – both lower than the previous generation. The EX line, which will see the highest sales volume, starts at $16,500 while the top-of-the-line, SX trim starts at $17,700 and offers features, including 17-inch alloy wheels and class-exclusive LED headlamp and tail light accents, a sport-tuned suspension with larger front brakes, projection headlamps, twin chrome exhaust tips, fog lamps, coming later this year UVO powered by Microsoft voice-activated infotainment system with a 4.3-inch color touch screen and rear camera display.

The B-class has come a long way in the last couple years. We should be thankful. No longer is driving a sub-compact some kind of lifestyle punishment. It’s almost become rewarding as demonstrated by the all-new 2012 Kia Rio.

(For the latest new car news, follow me on Twitter at aboutusedcars. You can also learn about buying and selling a used car at UsedCars.About.com.)