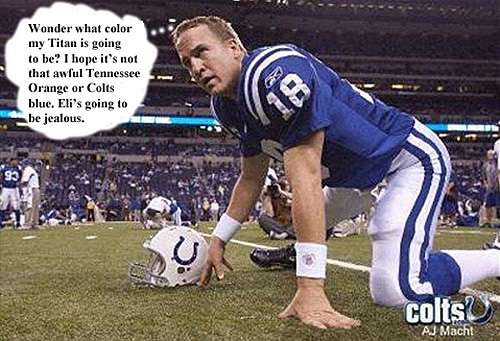 Nissan, which has its North American manufacturing facilities in Tennessee, wants to make Peyton Manning a Titan – whether it's as starting quarterback for the Nissan Titans or simply make him a pickup truck.
Advertisement

Nissan may be uniquely poised, among other corporate citizens of Tennessee, to make Manning interested in being a Titan. After all, as it points out in a letter posted on its website and Facebook page, “The Nissan Titan V-8 engine is built in Tennessee,” said Brian Carolin, senior vice president of sales and marketing, Nissan North America. “And even more poetically for Mr. Manning, the Titan itself is assembled in a place called Canton.”

As Nissan also points out, Manning played college football for the University of Tennessee. He is expected to be a first-ballot Hall of Fame inductee when he becomes eligible after retirement. The NFL Hall of Fame is located in Canton, Ohio.

Manning as a Titan may not be that far fetched. According to the Chicago Tribune, the former Indianapolis Colts star QB worked out for the Titans on Wednesday. Its GM Ruston Webster said, "I thought he looked comfortable throwing the ball and we had a good visit. This is another important step in the process." Manning sat out last season because of multiple surgeries for neck injuries.

Maybe the letter from Nissan North America is going to sway Manning's decision (well, that, and millions of dollars and a signed contract). Here is the text of the letter:
Dear Peyton,

We hope it’s okay to be informal and call you Peyton. You’ve been like one of the family to sports fans, especially Tennesseans, since your record-setting college days at the University of Tennessee.

Like you, we at Nissan North America were not all born to Rocky Top. But it is now home to our corporate headquarters and three manufacturing facilities employing more than 6,000 Tennesseans.

At Nissan, we too have fans all over the U.S.A. and we appreciate them all. And like all of your fans, we’re awaiting your decision on where to play next season. While we are in no position to sign you to any particular NFL franchise, we at Nissan North America want to make you a Titan – a 2012 Nissan Titan – as a gesture of gratitude recognizing your great accomplishments and philanthropic contributions to our national community.

We extend this offer on behalf of a nation of football fans and Nissan fans, not necessarily to influence your decision. So next time you’re in Nashville, give us a call and we’ll bring the keys.

In an effort to remain neutral, Nissan indicates it will make Manning a Titan regardless of the NFL team he chooses. Call it a guess but if he goes to another team, he probably doesn't show up in Tennessee to pick up the truck or, if somehow he does show up, it's going to be a stripper model. Odds are good it may not even have a radio.