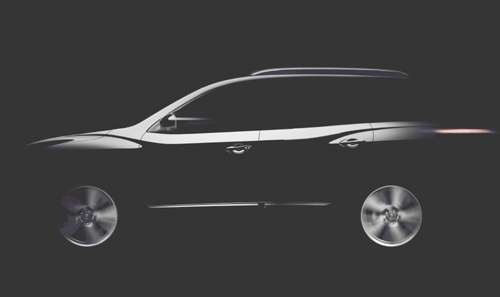 Nissan this afternoon released a teaser image of the Nissan Pathfinder Concept or as we at TorqueNews are calling it, the 2013 Nissan Pathfinder, ahead of its world debut at the North American International Auto Show, or as the rest of the world calls it, the Detroit Auto Show.
Advertisement

Thanks to a little help from our friends at PhotoShop, TorqueNews was able to lighten the photo released by Nissan to give us a slightly better look at the Nissan Pathfinder Concept. We didn't need PhotoShop to help us realize that this is pretty much the vehicle that goes on sale next fall as the 2013 Nissan Pathfinder because auto manufacturers only display concepts that have a sure shot at becoming final products.

The Pathfinder has been the bread-and-butter of the Nissan SUV lineup since it was first introduced in the U.S. market in just about 25 years ago. It has been a rugged SUV that could meet the challenges of much more expensive SUVs.

The model being teased by Nissan has seating for seven and ample cargo room. As the photo above shows, unlike the current generation, it has gently swooping lines that are suggestive of the Nissan Murano. It's going to be night and day in terms of looks.

Speaking of looks, the flash of tail light at the right of the photo suggests LED lighting for the Pathfinder. It also looks like it will have five-spoke, fan tail wheels. No other details were released.

This is the fourth generation of the Pathfinder with the last major change coming in 2005. Seven years is a long time for a vehicle not to get a major overhaul and the Pathfinder was starting to look dated. The current redesign seems derivative of what other automakers have done with their large SUVs, most noticeably the Mitsubishi Outlander, itself an attractive SUV.

Nissan is also hinting at new technology in the Pathfinder. Look for it to adapt hardware currently found in the Infiniti lineup including the AroundView monitor, which is pretty fascinating when you see it in action, as well as a seven-speed automatic transmission. Nissan doesn't hint at a new engine for the Pathfinder. The logical one would be the 5.6-liter V8 that produces 400 horsepower in the Infiniti QX56. Logical that is if you are a power-obsessed auto journalist.

Some version of a V8 will be offered along with a V-6 version as found in the current Nissan Pathfinder, which is bound to suffer anemic sales for the rest of 2012 once the concept is unveiled in Detroit. Expect only bargain hunters to buy the 2012 Pathfinder. The smart shopper will wait for the 2013 Nissan Pathfinder to come to market.

Nissan has set up a website for more information on the Pathfinder concept: http://Www.nissanusa.com/all-new-pathfinder/ At this point it just invites consumers to submit email addresses.