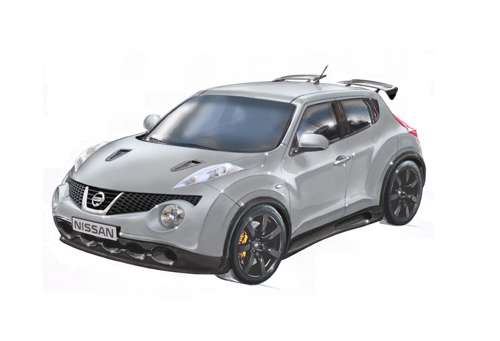 The announcement from Nissan that is building a Juke-R begs the question – is this more Nissan Sentra SE-R or Nissan GT-R? Based on the performance figures released, the proposed supersport crossover Juke-R is more GT-R.
Advertisement

The automaker is calling the Nissan Juke-R the first ever super crossover and the performance figures don't lie. The Juke-R is packed with a a 3.8-liter twin-turbo V6 engine adopted directly from Nissan’s flagship supercar. Under the floor hides the GT-R’s six-speed transaxle, with the front and rear ends joined by a modified GT-R 4WD driveline and prop shaft, while chunky 20-inch RAYS forged alloy rims fill each wheel arch.

The interior merges crossover and supercar with finesse, as the Juke’s dashboard has been transformed to accommodate the gauges, dials and 7-inch customisable LCD display from the GT-R. The Juke’s iconic center console, inspired by the fuel tank of a motorcycle, remains while the rest of the interior has the look of a machine bred for the track. Twin race-seats with five-point harnesses sit inside a visible roll cage that gives FIA safety standards as well as enhanced rigidity to provide the ultimate performance.

Now for the bad news. Only two Juke-Rs will be created: one in left-hand drive and the other in right-hand drive. That's right. The car is not for production. It is a one-off, road legal concept car developed by Nissan and built by leading motorsports outfit RML with input from Nissan Technology Centre for Europe (NTC-E). Let the gnashing of teeth commence among the Juke fanboy community (as well as performance loving enthusiasts everywhere).

Yet, oddly there might be some hope for this vehicle to come to fruition. After all, Nissan did spiff up its lowly Sentra. Plus, there is this telling line from the official announcement: "Fully road legal with GT-R drive train." Plus, Nissan claimed in the same announcement that the one-off concept is designed to test the public’s reaction to a seriously sporty Juke.

As it currently stands now, the Juke is fun to look at but is not seriously sporty. It has a standard 188-horsepower 1.6-liter Direct Injection Gasoline turbo 4-cylinder engine and an advanced torque vectoring all-wheel drive (AWD) system. It's sporty but not seriously sporty.

Maybe the 290-horsepower 3.5-liter DOHC 24-valve VQ-series V6 engine with 261 lb. ft. of torque from the Nissan Maxima could be dropped into the Juke to create the Juke-R. (That would save production costs and also not limit the production of the engine for the GT-R that continues to be a hot seller in its limited runs.) Power is bound to increase simply because the Maxima weighs 3540 lbs. vs. the Juke's somewhat more svelte 3157 lbs.

The Nissan Juke-R is currently in development. It is expected to complete first tests in November. For full details on Juke-R and to follow the car’s development, visit the Nissan Juke Facebook page.