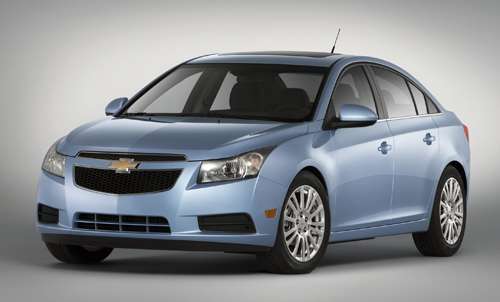 TrueCar Inc., an online automotive information and communications platform, today released a study which concludes, that depending on the vehicle you purchase, the hundreds of extra dollars paid for the premium fuel-boosting option could make financial sense or could prove to be a costly investment for minimal fuel economy gains.

TrueCar factored in the fuel economy of the two models: the ECO gets a combined 30.6 mpg while the standard Cruze is 30.3 mpg. Guess what? Based on that miniscule fuel savings, current fuel prices, and the $853 price difference, it is going to take a 2012 Chevrolet Cruze owner 48 years to make up the price difference in fuel savings.

Chevrolet PR did not respond to a request for comment before this post was published. When and if it does, the comments will be posted.

The second worst offender on the list is the 2012 Ford Fiesta SE with SFE package. SFE stands for Super Fuel Economy, which seems like a bit of a joke because the fuel economy difference between the Fiesta SE with SFE and the Fiesta SE is three-tenths of a mile per gallon. It's going to take you 36 years to pay off the higher price of the SFE model ($16,075 vs. $15,464). Apparently, you're paying $611 for the three extra letters and some for the PowerShift automatic transmission, a rear spoiler, side air deflectors, underbody shields, lower grille blockers, low-rolling-resistance tires and cruise control.

The vehicle that provides the best option for a consumer is the Mazda3 Touring with SkyActiv, which is cheaper than its counterpart vehicle, providing the best value for a consumer with immediate savings while the Chevrolet Sonic took nearly three years to pay off the premium for the Ecotec version. The popular Ford F-150 with EcoBoost took less than five years to break-even.

“The price of gas has consumers thinking about fuel economy but there’s a financial investment involved with most of these fuel-saving packages,” said Jesse Toprak, Vice President of Market Intelligence at TrueCar.com, said in a news release announcing the study. “It’s important to compare the improvements in fuel economy and the extra costs of the package before purchasing a new vehicle.”

What's the lesson to take away from all of this? Don't fall for marketing hype. Investigate the savings offered and see if they really pay off. The simplest way to do that is to head to FuelEconomy.gov and do a side-by-side comparison of the models. Divide the differences in annual fuel cost by the price difference and that will tell you how many years it will take to pay off the difference.

Anonymous wrote on April 15, 2012 - 6:30pm Permalink
grow a pair and test the cruze eco with a manual transmission, it averages 33mpg. so figure on saving $150 per year and it costs about $750 more than an LT so you'd be looking at around 5 years for it to pay itself off plus you get a set of cool looking wheels that only comes on the eco and are an inch bigger than the LT's oh and the eco is quicker to 60mph than the automatic LT
Anonymous wrote on April 15, 2012 - 8:29pm Permalink
and don't say that no one considers a manual, the take rate on the eco is very near 50%
Cruze Eco owner... wrote on April 16, 2012 - 10:10am Permalink
I completely agree. I own an Eco with manual. I am averaging 40.5 right now and in the winter it dropped down to around 36. Plus the standard features on the Eco are worth the price difference (Aluminum polished rims, spoiler, bluetooth, usb input, etc.). Plus, the aerodynamic advantages help with the wind noise too.
Anonymous wrote on April 16, 2012 - 11:01am Permalink
is that mostly highway or city driving? im debating between a cruze eco or a sonic with the 1.4T and a manual gear box, i heard that with a good tune it'll push out 180hp and over 200 lb ft of twist so it'll keep up with civic si's that cost almost 5k more and only pull into the 30 mpg's on the highway.
Cruze Eco Owner... wrote on April 16, 2012 - 11:57am Permalink
I'd totally do it man. I average 50% city, 50% hwy. The Cruze is such a solid car. Plus, the Eco model has shorter 1st and 2nd gear ratios (vs other Cruze models) and slightly lower ride height. I think the Eco is the fastest accelerating and would be the best handling with normal tires. Let me know if you can figure out how to boost power. That would be my only complaint about the car. But the gas mileage makes it easier to live with.
Anonymous wrote on May 22, 2012 - 12:17am Permalink
i asked the dealer where i bought mine and i was able to do the exhaust, which helped it breathe better, i put a boost gauge in it, i had someone make me the pipes for the turbo because the ones on the car were plastic but i made the pipes a little bigger also pulls a little better boost. if you don't care for your warranty you can do cold air intake and you can buy a chip that adds 60 horse and 7 more mpg. the chip costs 65.
Anonymous wrote on July 13, 2012 - 2:07pm Permalink
According to fueleconomy.gov 2011 chevrolet cruze eco msrp: $18,425 annual fuel cost: $1,550 1.4l turbo six speed manual next closest non eco cruze in price msrp: $18,125 annual fuel cost: $1,800 1.4l six speed automatic (did not have a 6sp manual listed) difference in price: $300 difference of annual fuel cost: 250 So in a little over a year the cruze eco will pay for its difference in price. Is it me or am I smelling a big pile of BS coming from this article. Granted I chose to show the eco model with the manual rather than the automatic but if your coming at it from a fuel economy stand point like this article appears to be than the manual option is your best choice. But even if you went with the automatic eco I still think it would be under 2 years to make up the price difference (didnt do the math). Regardless, that 48 year figure this article throws out is just blatantly wrong. And the last few sentences about the Ford Fiesta really had me laughing too: "Apparently, you're paying $611 for the three extra letters and some for the PowerShift automatic transmission, a rear spoiler, side air deflectors, underbody shields, lower grille blockers, low-rolling-resistance tires and cruise control." YES! Thats exactly what your paying for. In fact, I think that $611 for all those added extras including a different transmission is totally reasonable. Maybe their is something I am not seeing but I would sure like to here some reasonable explanation as to how they came about this figures and came make a claim of the cruze eco being a bad investment. For that matter, aren't all cars a bad investment? Except for the rare collectors cars, you pretty much only lose money on any car you purchase. For the record, I do not own a cruze or any of the above mentioned vehicles so I am not some sort of fan boy. I just saw an article I felt was making outrageous claims and wanted to rant.