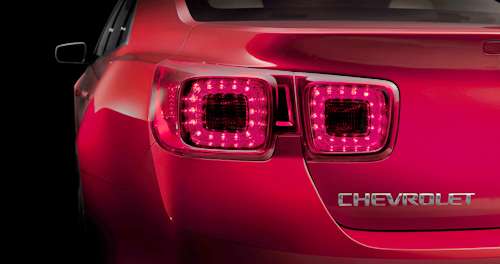 Set your calendars to yawn – the new eighth-generation Chevrolet Malibu will be introduced live starting at 8:30 p.m. EDT on April 18 on Facebook and live from the Shanghai Auto Show via webcast and not the New York Auto Show as might have happened in the past.
Advertisement

The timing of the 2013 Chevrolet Malibu introduction demonstrates the importance that Chevrolet puts on the Chinese market. Instead of premiering it at the New York International Auto Show media days taking place just two days later (and attracts hundreds of auto writers from around the globe) Chevrolet went for the big splash in the rapidly growing Asian market.

Why is China so important to Chevrolet? The most obvious reason would be its more than billion population that has automakers around the world salivating. China is a huge untapped market as more Chinese can afford cars.

As Chevrolet pointed out, last year, Chevrolet sold 4.26 million vehicles globally, or an average of one vehicle every 7.4 seconds. Eight of the top 10–selling markets for Chevrolet in 2010 were emerging markets – Brazil, China, Uzbekistan, Mexico, Russia, India, Argentina and Colombia. Emerging Markets are expected to account for more than 50 percent of Chevrolet global sales by 2012.

According to a Chevrolet press release, the Malibu will feature a global family of fuel-efficient and powerful four-cylinder engines, along with six-speed transmissions that also contribute to efficient performance. The new Malibu is Chevrolet’s first midsize car to be sold globally. It will be sold in nearly 100 countries on six continents and built in multiple locations, including China and two facilities in the United States.

Those four-cylinder engines are important to the Malibu being a global car. Expect diesel variants in every market except the United States. It will be interesting to see how the Malibu is sold in other markets because its size makes it a more luxurious car than what Chevrolet has sold in the past.

The Malibu has consistently been yawn inducing in its last couple of generations with mostly rental car company buyers lining up to purchase it. The teaser photo released with the announcement implies a strong styling influence from the Chevrolet Camaro, which could bulk up the Malibu's appeal instantly. It's not been faulted for being a bad car – just an uninspired looking sedan. The photo shows some sharp defining creases along the side that suggest this design has some bite to it.

But we'll allow Chevy to brag about the Malibu. The Malibu was Chevrolet’s – and GM’s – best-selling car in the United States in 2010, with sales of nearly 200,000 vehicles (think fleet sales). It is among Chevrolet’s most-decorated vehicles in the United States, earning more than 40 industry awards since 2008. The Malibu was the only midsize car in the industry to win the Consumers Digest Automotive “Best Buy” award the last three years – 2011, 2010 and 2009. The Malibu has also been named a “Top Safety Pick” by the Insurance Institute for Highway Safety the last two years.

More than 600,000 Malibu cars have been sold globally since 2008, when it was named the North American Car of the Year. The 2013 Malibu represents the eighth generation of the nameplate, which was introduced in 1964. Chevrolet hopes that by introducing it first in the Shanghai Auto Show it will truly become a global player.