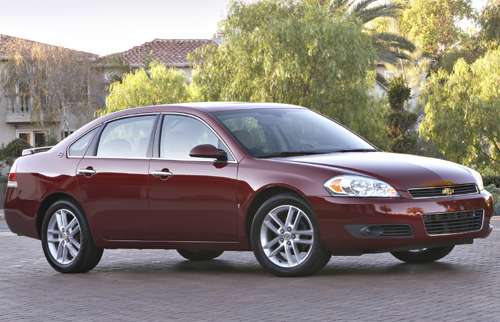 Most Popular Vehicle Among Military Personnel a Chevy

When it comes to our military personnel, the most popular vehicle among those financed is a Chevrolet, but it's not a high-flying Chevy Camaro like one might assume. It's a much more sedate choice.
Advertisement

SNAAC discovered that domestic models dominated the list. Eight of the 10 vehicles came from a Big 3 manufacturer.

1. Chevrolet Impala – Somehow this really mundane sedan keeps showing up on most popular lists. It's among the most sold used cars overall. It just goes to show that some people favor practicality over passion.

2. Dodge Charger – It's great to see an American icon like this is popular with the troops. Passion isn't dead.

3. Nissan Altima - The 2012 Nissan Altima is an enduring icon of the Nissan lineup now entering its 20th year of production in the United States. This stylish sedan and coupe, though, have not idly stood by in those two decades and continues to be an exceptional value that combines strong performance and sporty design.

4. Dodge 1500 – Technically, it's now called the Ram 1500 but was known as the Dodge Ram 1500 for years. What's surprising, though, is the Dodge 1500 is usually the third most popular selling pickup truck when new.

5. Ford Mustang – The Chevrolet Camaro doesn't even make the list. (Kind of sad that the Impala does.) But it's not surprising to see the troops like the great American pony car that has been around since 1964.

6. Pontiac G6 – Bland wins out again. The one good thing about the death of Pontiac was the death of the G6. Look up uninspired. You'll see a picture of a Pontiac G6.

7. Chevrolet Cobalt SS – It's a good little coupe. This must be what people buy while waiting to jump in pay grades. Buy a Cobalt after boot camp. Trade it in for a Charger after a couple of tours overseas.

9. Chrysler 300 – The sedan that jumpstarted Chrysler's revival has held up well over the years. It's comfortable, stylish, and quick off the line with the right powertrain.

10. Honda Civic – Sadly, our military does not pull down big salaries, especially the enlisted men and women who aren't officers. Fortunately, they can get good basic transportation in the form of the Honda Civic that is reliable.

Anonymous wrote on January 15, 2012 - 10:03pm Permalink
I'm 6'3" 225lbs and "most of the new cars these days are extremely confining. (please note the general size of todays soldiers) The dash that smacks the knees, the door handle "console" that slams your left leg into the steering wheel, the wide Console that limits right leg travel to .00001" between it and the steering wheel. The Chevy Impala is the only car out there now that you can get without a Console!!! how pathetic!! It's the last comfortable car you can buy if you are over 6' and doing any amount of traveling. You wonder why so many "big guys" buy trucks?
Keith Griffin wrote on January 15, 2012 - 11:49pm Permalink
Great observations because I'm a big guy, too. Most of the cars on the list actually have decent room regarding your concerns. I've driven all of them but you're probably right. The Impala would probably provide the most comfortable ride. There is one excellent observation in your post I agree with 100 percent. Why do car companies not have more room on the door? I HATE those door handles that jut out.