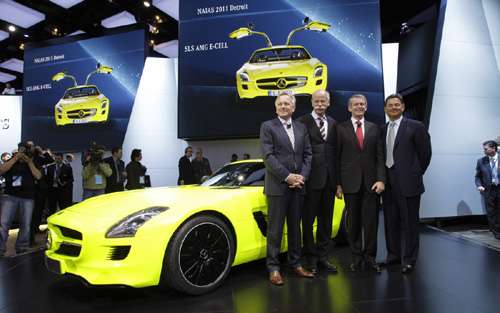 Ernest Lieb Out as CEO of Mercedes-Benz USA

In one of the more befuddling shakeups, Mercedes-Benz USA has announced that Ernst Lieb is out as CEO of Mercedes-Benz USA. The move comes in the midst of the company enjoying some of its most successful years ever in terms of products and sales.
Advertisement

The DetroitNewsBureau.com is speculating that Lieb's departure apparently caught even company insiders off guard. The website said, "Company officials issued only a terse formal statement noting, 'Ernst Lieb has been excused from his duties as CEO of Mercedes-Benz USA (MBUSA), effective immediately. Daily business operations of MBUSA will be conducted by Herbert Werner (CFO and Vice President Finance, Controlling & IT) until further notice.'"

Lieb is pictured fourth from the left in the picture accompanying this article. He is with Dr. Joachim Schmidt, Dr. Dieter Zetsche, Dr. Thomas Weber and himself with the SLS AMG E-CELL at Mercedes-Benz press conference at the Detroit Auto Show this year.

“I don’t understand this. It had to be something personal considering they’re gaining share and improving sales,” said analyst Joe Phillippi, of AutoTrends Consulting, told DetroitNewsBureau.com.

The Wall Street Journal (subscription required) said, "The German-born Lieb spent a total of 36 years at Daimler, including five in the top spot at Montvale, N.J.-based Mercedes-Benz USA. Daimler said Lieb remains with the company in an unspecified role.

Lieb first joined Daimler in 1975 as a spare parts specialist and went on to lead Mercedes-Benz Canada in 1995. He was named as the head of DaimlerChrysler's Australian and Pacific operations in 2003, before becoming Mercedes' U.S. president and CEO in 2006. As the head of the brand's U.S. operations, he oversaw the sales, marketing and service of Mercedes and Maybach vehicles, parts and accessories in the U.S. market.

Lieb was a personable man who was reportedly popular with dealers. At the summer launch of the Mercedes-Benz M Class in Montana, he mixed easily with the gathered journalists and even dubbed Western gear at a riverside cookout with a Western theme. (Not to say he looked comfortable necessarily but he got into the spirit of things.)

Mercedes is coming off its best September ever in sales. It reported September sales of 23,897 vehicles, a 15.6% improvement over September 2010 (20,666) and the company’s highest September volume on record. On a year-to-date basis, the 183,711 vehicles sold represent an 11.1% increase over the 165,355 vehicles sold during the same period last year.

The highest volume performers for the month were the C-Class and E-Class model lines. The all-new 2012 sporty C-Class – and gateway to the Mercedes-Benz brand for younger and first-time Mercedes-Benz buyers – led the pack with sales of 6,865, up 32.1% from September 2010. The 9th generation E-Class followed with sales of 5,122 and the full-sized SUV, the GL-Class, finished third in volume with monthly sales of 2,541. Additionally, sales of the newly launched 2012 CLS-Class posted a 399.3% increase for the month and sales of the new SLK roadster were up 50.8% over September 2010.

More details are bound to follow in the coming days about Lieb's sudden departure as CEO of Mercedes-Benz USA.