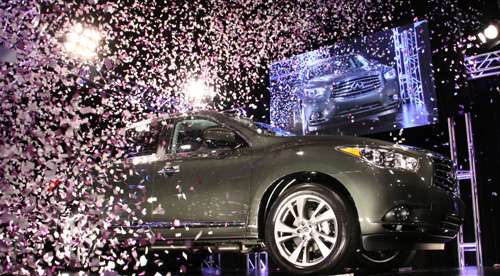 A Mea Culpa to Infiniti About its Irrelevance

It is not easy to admit mistakes, but I have to in this case. Back in January I wrote that Infiniti was heading down the path of irrelevance, much like Lincoln is doing over at Ford. Well, Infiniti, all I can say is a qualified "Mea culpa" or forgive me.
Advertisement

When the article about Infiniti's irrelevance was first written, I felt comfortable in my arguments. After all, its sales numbers were down and Nissan, its parent company, does make some great products that compete in terms of quality and appeal and made Infiniti seem irrelevant.

The sales numbers seem to bear out that Infiniti as a brand is still struggling. As Kyle Bazemore, senior manager for Infiniti Communications, pointed out to me when my opinion piece ran in January, Infiniti had a tough year in 2011. A large supply of finished Infinitis were sitting on the docks when the March 2011 Tsunami struck – wiping out lots of supply. Infiniti suspended advertising of the line until September when the line was back to capacity.

That doesn't completely explain, though, why its sales numbers for the first two months of 2012 are down 3% compared to 2011, which is before the Tsunami hit. Just to make things more intriguing, Lincoln's sales, while lower in total units, are actually up 4% over 2011 without new product. (Overall sales in February were up about 16% for new cars and trucks.)

It's the new product, though, that's probably going to make Infiniti numbers shoot up in March and beyond. The 2013 Infiniti JX, being built in Tennessee, is a stunning seven-passenger luxury crossover that is truly beautiful to behold. It's a technological wonder as well as packed full with luxuries.

The only thing that is going to hurt its sales is $5 a gallon gas. Sure the affluent don't care what they pay for gas but they don't want to be seen driving big vehicles (a la Marie Antoinette and the peasants eating cake). Fortunately it's mated to a V6 that does get respectable fuel economy at 17-mpg city and 23-mpg highway.

As Bazemore notes, the introduction of the JX, which I first laid eyes on at the New England International Auto Show just days after slamming Infiniti, fills a much needed hole in the Infiniti lineup. He's right there. It is a long way between the FX and the QX – the latter which is probably the best driving big SUV on the market.

So a belated mea culpa to Infiniti. I hope great things are ahead for it in 2012 and I apologize for comparing it to Lincoln. Sure, the Ford luxury brand is having a better sales years to date in percentage growth but Infiniti by far has the edge when it comes to product.

Don Bain wrote on March 19, 2012 - 1:02pm Permalink
Liking Infinitis is nothing to apologize about, but they are listed as the fifth least reliable brand by 24/7WallSt. Right after Chrysler, Dodge, Jeep and Jaguar. It's all based on the number of reported problems per 100 vehicles sold.