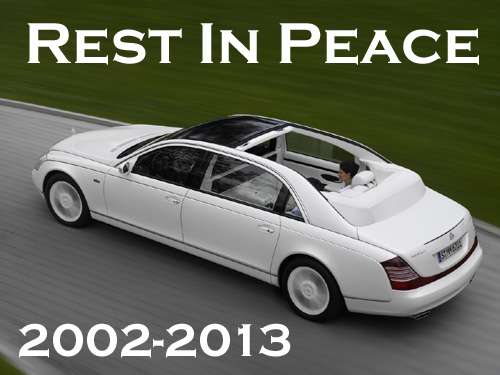 Maybach Will Cease To Be After 2013

Stunning news is hitting the automotive world today with numerous published reports that Maybach, Mercedes-Benz's ultra-luxury marque, will cease to be after the 2013 model year.
Advertisement

The news of Maybach's demise is not going to have the same impact as, say, Pontiac shutting its doors – or even Hummer. Its departure is going to be little felt, especially at Mercedes which lately had to have felt handicapped by the Maybach lineup that was draining money and hurting the German manufacturer's overall aura of success.

The Maybach was introduced to take on Rolls-Royce and Bentley after a failed attempt to purchase Rolls-Royce. (BMW became the eventual owner.)

Back in 2002, the Maybach was introduced to massive fanfare in New York City, with the first models being flown via helicopter from a cruise ship in the East River. No expense was spared for the luxury models that cost north of $375,000 and topped out at $1,382,750 for the Maybach Landaulet (pictured above), that could best be described as an open-air limousine that Maybach said was "unrivaled by any other automobile in an environment of the utmost luxury and exquisite style."

Maybach used to also say it built the world's most exclusive luxury cars but is it really right to describe yourself as exclusive just because nobody (well, next to nobody) was buying you? According to a report at Autoweek.com, Maybach never hit its initial sales targets of 800 models a year.

This decision by Mercedes-Benz means the company is going to push up into the ultra-luxury market to, in effect, build on its already strong brand name in the United States and around the world. Interestingly, the only place Maybach appeared to be doing well was in Germany. That would make sense because Mercedes-Benz is a much more prevalent vehicle in its homeland, even being put to use as taxi cabs. Affluent Germans probably craved a car not associated with livery service.

According to the Maybach USA website, there were 30 dealerships or "studios" as they were somewhat pretentiously called. When the brand first launched in 2002, dealers were required to make massive capital investments to create these studios that were advanced at the time for giving the customers the ability to create their Maybachs (within limits) from inside the studios.

Mercedes didn't even bother updating the Maybach line at all for the 2012 model year. The last time it announced any updates for the brand on the Mercedes USA media website was back in July 2010 when it was announced that exterior updates included a restyled exterior with a raised hood, larger grille, divided bumper, LED daytime running lights and darker tail lenses. Interior changes include .925 sterling silver "Maybach Manufaktur" badging in seat backrests, new seat stitching as well as new interior colors, trims, and paints throughout the entire model line.

Auto Interest wrote on November 25, 2011 - 4:17pm Permalink
It is so sad to see Daimler scrapping Maybach. I never got a chance to drive one. Oh well, that's not life's meaning anyway. Now this will become a collector luxury car.