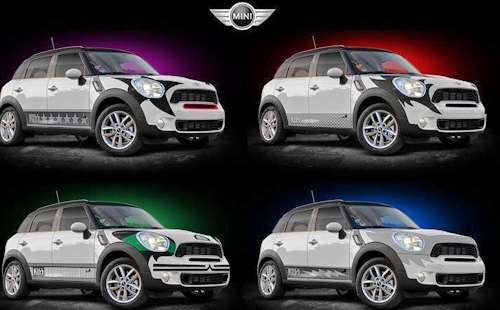 At first the notion sounds silly until you realize it's for UNICEF, but you can buy one of four extremely limited edition Mini Countryman custom painted with the iconic makeup for each member of Kiss, the 70s rock band that is still selling out shows almost four decades later.
Advertisement

You will be helping out children in Japan and other emergency relief efforts worldwide with your purchase of one of the Mini Countrymans, which are being sold online at www.eBay.com. Auction participants can bid on any of the four MINI Countryman vehicles, each autographed by the entire band.

The auction runs through June 8 at 4 p.m., Pacific Standard Time, which means you should be able to take delivery by Father's Day if you play your cards right.

“Helping others is a gift we can give ourselves, but here’s a four wheel bonus!” said Kiss co-founder Paul Stanley. “The Kiss Mini’s are the ultimate way to show your KISS Army colors while helping our friends in Japan who have been devastated by the recent earthquake and floods. We’re asking everyone to open their wallets to help UNICEF raise money for children who are still coping with the effects of these disasters.”

Of course, knowing the band's deep seated desire to turn a buck, if these four Mini Countryman turn out to be hits (and early bidding seems strong), there could be special Kiss edition Minis coming down the road.

The custom-painted vehicles are the all-new 2011 MINI Countryman, and feature the iconic makeup and costume association of one KISS member including co-founder and rhythm guitarist Paul Stanley (Starchild), co-founder and bassist Gene Simmons (The Demon), lead guitarist Tommy Thayer (Spaceman) and drummer Eric Singer (Catman). In early bidding as of noon EST on May 31, Stanley was the only Kiss member not to break the $20,000 threshold.

The original artwork for all four vehicles was painted by a team of three BMW Group employees, mostly after normal business hours and on weekends. The designs were influenced by each band member’s iconic makeup, as well as some attributes of their costumes. Each car was taken apart and components were painted individually to ensure proper coverage and a quality finish that will last.

“It’s been a lot of hard work, but the team is thrilled to help contribute to this much-needed cause,” said Dan Doot, BMW Group Paint and Body Team Leader. “We have a real passion for this type of work.”

All of the MINIs will also be autographed by all four members of Kiss. “The KISS MINIs are the perfect Father’s Day gift for the man who has everything,” said KISS co-founder Gene Simmons, “But this ain’t your father’s car. It’s bigger, better and the very best for the man who has the rest. It’s Kiss, baby. The custom-painted MINI Countryman would be the ultimate collector’s item for a Kiss fan or curator of rock band memorabilia, and would be the perfect addition to a car collector’s garage; plus the new owner will have the satisfaction of knowing they’ve supported a great cause.”

One thing Simmons fails to mention is it might be a great item for fans of his A&E show, "Gene Simmons Family Jewels" that, apparently, has been on the air since September 2006.

“Mini has a long history of philanthropic activities as part of our MINI Motoring Hearts program, which is all about giving back to the community,” said Jim McDowell, Vice President - Mini USA. “These efforts support that and we are happy to help UNICEF make a difference in these kids’ lives.”

cyborg88 wrote on August 23, 2012 - 10:26pm Permalink
I really enjoyed to read your article, it good to reading, and thank you for sharing with us. I found this is an informative and interesting post, so i think so it is very useful and knowledgeable. I would like to thank you for the efforts you have made in writing this article. cyborg88 skilch.com