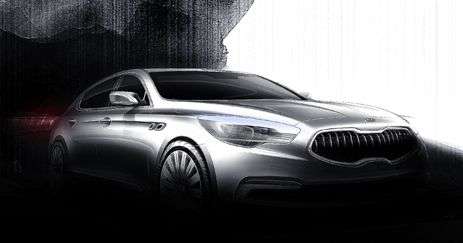 Kia has released unexpected sketches of what it says will be its all-new flagship sedan with some distinct design flairs that show the Korean automaker is working hard to come out from the shadow of its parent company.
Advertisement

The large sedan is going to be Kia’s first rear-wheel-drive product, which seems to hint that it might share a platform with the Hyundai Equus. Hyundai is the parent company of Kia in Korea and Hyundai is unveiling what it calls the Equus 5.0 today to the media in Las Vegas.

Codenamed KH, it combines innovative design with high-tech features. KH is among the company’s most eagerly anticipated new models and will be launched in Kia’s domestic market in the first half of 2012.

Kia is giving this the standard PR spin with this declaration: “The design concept behind KH is ’distinctive, modern and classic’, which is expressed through sophisticated, technically-advanced elements combined with Kia’s existing dynamic design language to create a vehicle that truly stands out from its competitors.”

The last few words of that statement are most telling. As the Equus demonstrates, the Koreans are stepping up their game with the introduction of large, luxury sedans. While they’re not ready to introduce pickup trucks yet, they are working hard at becoming full-line car companies that sell everything but pickups.

Here’s some more of the design PR: “The new model features a bold front-end design appropriate to a luxury car. Kia’s charismatic family-look radiator grille is flanked by modern headlamps that reinforce the brand’s innovative challenger image, and the proportions of the unique hood design give KH a classic car-like feel.”

KH’s profile, which was a key focus for Kia’s designers during development, features a simple side character line to give a feeling of spaciousness while emphasizing the new model’s bold and dynamic image. The high-tech rear combination lamp clusters, plus the luxurious, bold chrome accent give KH a sophisticated and stable rear view.

The side view is becoming as important in automotive design as the front and rear fascias. Dodge, for example, worked hard to make the sides of the new 2012 Charger absolutely pop so you instantly recognized the car from the side.

 Soon-Nam Lee, Kia’s Director of the Overseas Marketing Group, says, “Our all-new flagship sedan integrates all of our key capabilities such as design, performance, high-tech features and infotainment into one striking model. Although launch timings for overseas markets are yet to be confirmed, this all-new rear-wheel drive large sedan will definitely become the leading model of our line-up around the world, showcasing the best of the best of Kia.”

At the earliest, expect the Kia KH to hit the North American market in the first quarter of 2013. The new flagship sedan could be introduced at next year’s Detroit Auto Show but it is more likely to make its North American Debut at the 2012 Los Angeles Auto Show.