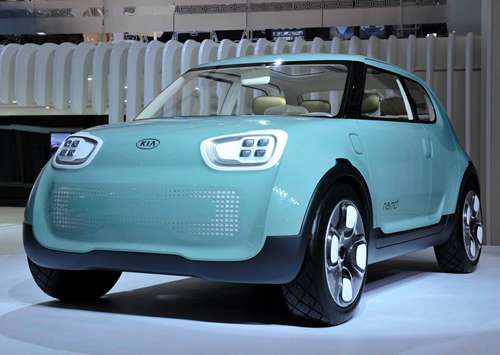 The first Korean electric vehicle is going to have its North American debut tomorrow. Two things are surprising about that. It's not the Korean company you think and the debut location is not at the North American International Auto Show.
Advertisement

Instead, Kia has chosen the International Consumer Electronics Show in Las Vegas for its debut of the Ray production Electric Vehicle (EV) and Naimo EV concept car for the first time in North America.

Both vehicles feature advanced lithium polymer battery packs, and the Naimo introduces an all-new and groundbreaking User Centered Driving (UCD) telematics concept which previews future possibilities in safety, media and entertainment in-vehicle technologies. The lithium polymer battery packs are currently in use in Kia and Hyundai's hybrid vehicles on sale in North America.

Many might have expected Hyundai, the parent company of Kia, to come out with an electric vehicle but its green bona fides are heading in a different direction. Green Car Reports says Kia is going to have the electric vehicles while Hyundai focuses on plug-in hybrids and fuel-cell vehicles.

Capable of a range up to 86 miles on a single charge, the Ray EV is powered by a 50kW electric motor and high-capacity 16.4 kWh lithium ion polymer battery pack engineered to be capable of a 10-year lifespan and packaged neatly under the rear seat and cabin floor, with the battery only needing six hours to be fully charged using a 220V outlet and just 25 minutes while in “fast charge” mode. That would make it among the fastest charging electric vehicles on the market.

Currently the Ray is being built in Korea for the Korean market. Kia bringing it to the United States points to it probably becoming available in the North American market in the next two years if sustained interest can be demonstrated in the EV market. Korean manufacturers are not ones to rush products to market for a perceived need.

Inside, the Ray EV features a unique instrument cluster, displaying electric motor operation, battery status and distance to recharge. It also is equipped with the first-ever EV-specific navigation system that features a seven-inch screen and provides crucial information for EV drivers such as the nearest locations of slow/fast recharging stations. The display shows a circular-shaped area in which the vehicle can travel with its current level of battery power, so that drivers can see which destinations are reachable without a recharge.

The UCD Concept, which can be seen as a fully working prototype on the Kia Naimo zero-emissions EV concept, represents the future of vehicle/occupant relationships. Featuring a “glass cockpit” style interface, UCD employs a digital “heads-up” display that replaces the traditional gauge cluster for information including speed, distance and battery life. The display also incorporates augmented reality features such as navigation directions or downloadable applications for parking.

To improve screen visibility and accessibility, the UCD concept increases the touch-screen currently found on Kia’s UVO system from 4.3 inches to 12.3 inches with a resolution of 1280x480 for crystal clear images. This new, larger touch-screen also allows users to use multi-touch interactions such as “swipe” and “flick”. That screen is as large as the one found on the 2013 Lexus GS 350 that is set to roll out in February without quite the same features as found in the UCD.

The UCD concept also takes significant steps in safety, including the integration of the driver-status monitor. Using an infra-red LED and camera to monitor the driver’s face, the system detects changes in eye movement and also recognizes whether the driver’s eyes are opened or closed, examining alertness and safeguarding against an accident caused by the driver falling asleep at the wheel. This is similar to the system currently found in the Mercedes E and S class sedans.

Taking its name from the Korean word "Ne-mo", (pronounced “Neh-mo,” meaning “square shape”), the Naimo EV concept was conceived by Kia's international design team in Seoul, and is characterized principally by its simple lines and solid, muscular stance. The third electric vehicle design to be unveiled by Kia Motors Corporation in a year, the 153.5-inch long Naimo concept explores the possibility of introducing a zero-emissions, five-door, four-seater city car into future markets.

One of its most intriguing features would have to be the lack of windshield wipers. Instead, it employs a high-intensity air jet at the base of the windscreen that performs an “air wiper” function. Conventional door mirrors have also been replaced with miniature cameras installed in the A-pillars. The latter could have the most impact on avoiding lane-changing accidents.

Nicolas Zart wrote on January 10, 2012 - 10:28am Permalink
It looks surprisingly good at this stage. Wonder how much they will bring on the market for. I'm thinking about driving to see the show on Sunday to have a closer look.