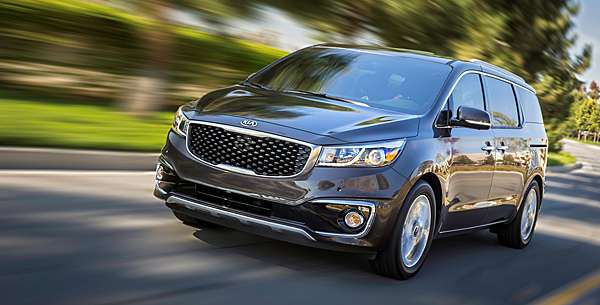 It's Beautiful Inside and Out but Who Will Buy the Kia Sedona?

Thanks to prominent placement on Live with Kelly & Michael, stay-at-home moms all over the land are now familiar with the beautiful 2015 Kia Sedona. With that burst of exposure comes this question - who is going to buy it?
Advertisement

Unlike other recent Kia success stories, like the Kia Forte and the Kia Optima, the Kia Sedona enters a segment that no one is anxious to enter. No one aspires to own the latest, greatest minivan and that's a shame because it appears the Sedona might be a great minivan from initial impressions.

It's going to have some cool technology. Kia says, "Building on the next-generation UVO Infotainment & Telematics system, the all-new Sedona will be the first Kia vehicle to offer four new eServices features: Geo-fencing, Speed Alert, Curfew Alert and Driving Score." I've seen the aftermarket versions of this technology demonstrated at CES in Las Vegas and I can only imagine what it's going to be like with an OEM including it.

Additionally, with the introduction of the Kia App store, select apps can be downloaded for free from iTunes or Google Play, the Korean automaker says. The Kia app connector is now available for partnership with the content community, including Pandora, iHeart Radio and Yelp. Many more new technologies for comfort and convenience are featured in the new UVO system, including Siri “Eyes Free” and Local Search – powered by Google – for finding locations, addresses and points of interest.

Even the fabric in this minivan is cool. According to Kia, "The Sedona also is the only vehicle in the segment outfitted with standard YES Essentials fabric technology to provide anti-microbial protection from spills, anti-static protection from irritating electrical shocks as well as stain-repelling and stain-releasing fabric characteristics appreciated by anyone who leads an active lifestyle."

The 2015 Sedona is built on an all-new chassis with static torsional stiffness that is 36-percent greater than its closest segment competitor. That will make it more fun to drive – but no one buys a minivan to drive it. They are bought as family haulers. Hitting S-curves hard is only going to make Junior car sick and Mommy mad.

So, once again, the question hangs over Kia: who is going to buy the Sedona? Frankly, we hope it succeeds wildly and puts a dent in the market currently held by Honda, Toyota and Chrysler. It's a great minivan but it's going to need buyers.

Frank Spinazzola wrote on June 14, 2015 - 5:05pm Permalink
When are car manufacturers going to stop selling needless gadgets and start selling quality? What good is a 100,000 mile warranty when cars are so expensive you can only afford to lease them at 3 years and 30,000 miles. I think they purposely make them too expensive to buy so you have to lease to keep your payments down. They have turned cars into just another utility bill that you will never be out from under until you no longer need the service. If you do 25 - 30 thousand miles a year like I do, a lease makes no sense. However, by the time it's paid off in 5 years, it's time to buy another. What a rip off cars have become.