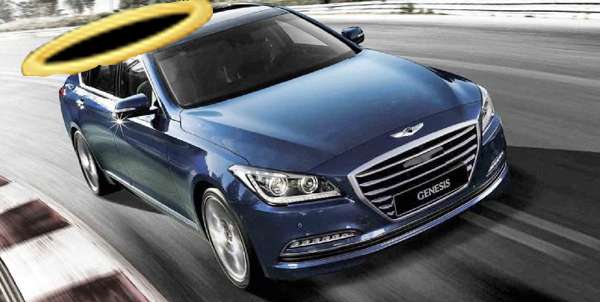 The 2015 Hyundai Genesis sedan is going to be marketed as a father-figure, guardian angel in the Super Bowl television ad. It sounds like it's going to hammer home the message that safety is an important selling point but do American buyers care about safety over other things?
Advertisement

According to an article in Ad Age, Hyundai is going to replace your dad with all of the safety features in the new 2015 Genesis sedan. The article asks the question, "Madison Avenue has gotten better at portraying dads as more than bumbling dorks. But are Super Bowl TV viewers ready for My Dad the Car?"

The article continues, "During the first of its two in-game commercials on Fox's telecast of Super Bowl XLVIII on Feb. 2, Hyundai will portray its Genesis luxury sedan as the next best thing to the Dad whose preternatural sixth sense saved you from stitches when you were growing up."

Basically, the ad is going to kick off with a dad rescuing his son from the various pratfalls of a young life. The commercial then cuts forward, according to Ad Age, to the young man as a 16-year old driver. At this point, I think the dad needs somebody to protect him but that's obviously a different commercial.

Now here's the point of the commercial that doesn't make sense, from reading the article. "Junior is not paying attention when a truck stops in front of him. But Genesis' radar-based automatic emergency braking system saves the day by bringing the vehicle to a complete stop."

I understand the emergency braking system, which is among the new safety features on the 2015 Hyundai Genesis. But, "[j]unior is not paying attention" when he's out driving with dad? Maybe it's a good thing that the kid was driving the new Genesis because his dad is obviously not teaching anything about safety. Apparently dad thought he was done on that whole front once the kid started to drive.

But seriously, the issue I wonder about is the marketing of the Genesis under this moniker, as Ad Age says, that Genesis's "360-degree halo of safety" can help drivers avoid otherwise painful collisions. Just like dear old dad.

In my opinion – and I am no match for the marketing brilliance of Steve Shannon, who has been ranked as the world’s 17th most influential Chief Marketing Officers in a 2013 study from Appinions. The second annual CMO Influence Study, conducted by Appinions for Forbes, analyzed the top 500 companies from the Forbes Global 2000 Biggest Public Companies list to determine the most influential CMOs among those companies.

Hyundai seems to be ripping a page from the Volvo playbook with this focus on safety. It's as if it believes it is going to move more of the near-luxury sedans by targeting how safe the vehicles are.

But safety continues to be a low point when it comes to vehicle consideration. As veteran automotive journalist Jim Montavalli observed in a post at CarTalk.com, "Americans do want it all, but they’ll settle for something affordable with good fuel economy, styling and image, in that order. Automakers: No bland meat-and-potatoes sedans—the public wants pizzazz. And electrics with high voltage."

By the way, expect the commercial to have some great music. As AdWeek observes, "Historically, Hyundai has used music to great effect in its big game ads. The "Team" ad from this past Super Bowl, for example, featured Quiet Riot's 'Bang Your Head.' The automaker is mulling several song options for the father-son ad, including a George Harrison version of Bob Dylan's 'If Not For You.'"

And, in case you were curious, here's George Harrison's version of "If Not for You" (the acoustic version from a demo);

Hyundai is also going to be producing a second Super Bowl commercial on the Elantra. Frankly, I'm not as keen on that one because it promises to be three celebrities. Hyundai has had great celebrity voiceovers, including Kelsey Grammer and Jeff Bridges, but never relied on celebrities in its ads. Maybe it's a result of the success of Will Ferrell and his Anchorman character selling the new Dodge Durango. Frankly that would have me running screaming in the other direction but, again, greater minds than mine are in charge of Hyundai marketing.

Hyundai's two ads have yet to be shot; one shoot is scheduled for this weekend, and the other the weekend after that. Both commercials will be shot in the Los Angeles area, according to AdWeek. Keep us posted if you see production!