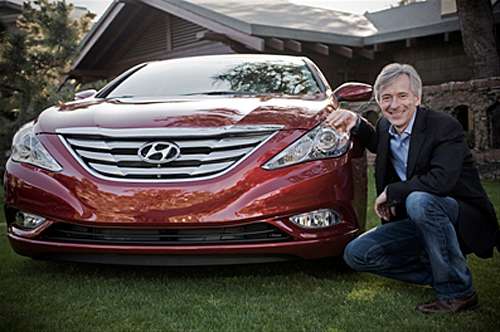 It seems as if Hyundai may be in for another record sales year in 2012 but its U.S. CEO and president is striking a cautious note about the overall industry.
Advertisement

Speaking before the media at the launch of the 2012 Hyundai Veloster Turbo in San Diego, Krafcik was his normal upbeat self when talking about the Korean manufacturer's success so far in 2012. But then his confidence seem to slip ever so slightly and it went mostly unnoticed by most of the media present.

Here is what he said, in part, during his remarks on the company's U.S. sales. "We're doing OK," Krafcik said somewhat modestly before proclaiming, "Last month (May 2012) was our second best ever." It was the third month in a row that Hyundai topped 60,000 in sales. "We have a shot at hitting 700,000 [units sold], which we've never done before," he added.

Then he dropped what should have been a bombshell, considering it came from one of the most upbeat CEOs in the business. Krafcik said, "We are seeing some signs of weakness. It remains to be seen if the industry is going to be as robust as the first five months."

The topic was quickly dropped and Krafcik moved onto brighter news about the company. Yet there were indications further on in his remarks that Hyundai is going to be held back from hitting the numbers it wants because of production constraints.

In effect, Hyundai is becoming too popular with certain models. (The Azera, for example, has a 12-day supply vs. the industry average of 60 days and a whopping 95 days for the Ford Taurus.) It seems as if it should be a good thing to be too popular but it's not.

Customers may not be willing to wait a long time to purchase a new car like the Hyundai Accent when it has serious competition in the compact car class. Why wait to get the exact car you want when you can, figuratively, walk across the street and buy a Ford Fiesta? Also, once you lose that customer, it takes years to get them back.

Is Hyundai going to have a great sales year? Without a doubt but it appears the Korean manufacturer and others selling in the U.S. market may not have the great year that some have been predicting. We'll have to check back on Jan. 2, 2013 to see how prescient Krafcik was.