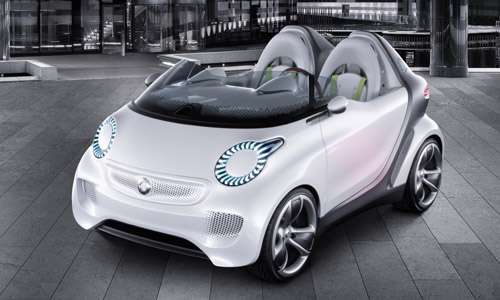 A lot of the concept vehicles being presented at the Geneva Motor Show are just steps away from production but common sense indicates the smart forspeed electric vehicle may never get the green light.
Advertisement

The smart forspeed concept electric vehicle is an open-air roadster at its purest state. It has no roof or side windows and it features a low wind deflector instead of a windshield. But smart says not to worry. If you get caught in a sudden downpour, no serious damage will result because there are drains built into the floor.

Dr. Annette Winkler, head of smart says "The smart forspeed is a completely new take on how much fun it is to drive electric: it boasts a superb design with a powerful drive system and, needless to say, locally emission-free. And if you put the smart forspeed next to our ebike, escooter and smart fortwo electric drive you'll see that smart has realized all kinds of variations of electric driving - demonstrating that smart is not just a practical city car, but a great idea."

This is without a doubt a city car (i.e. a vehicle that will make you break out in cold sweats if you ever have to drive it on a highway). Among its highlights, according to smart, is its ability to go from 0 to 37.5 mph in 5.5 seconds, which is probably zippy enough for city traffic. For those white-knuckle moments when you hop on the highway, there is a boost button in the center console that provides extra power for passing. No word from smart on how quickly that depletes your battery.

The smart forspeed is powered by a lithium-ion battery that delivers 16.5 kWh of electrical energy. A fully charged battery is sufficient for about 85 miles of driving fun. Quick charging from 0 to 80 percent takes just 45 minutes.

The smart forspeed developers have taken technology from the smart escooter to charge the on-board electrical system. Photovoltaic cells in the windshield feed solar power to the system. While it won't provide enough power to run your car, it can lengthen the battery life of your smart phone.

Speaking of smart phone, the smart forspeed (by the way it's smart's idea to be all lower case letters and not bad grammar on our part) is set up like the Batmobile with the driver and Robin, I mean the passenger, siting in front of two separate round turbine-like instrument clusters. The driver gets the naughty bits (the speedometer and the tachometer) while the passenger handles communication and navigation via a smart phone in this part of the cockpit. When the driver is flying solo (Robin, as the boy wonder, does need to go to school sometimes), the smart phone can swivel 90 degrees towards the driver so the navigation display can be read.

As mentioned above, the whole interior of the smart forspeed can be protected against rain and sun when necessary with a tonneau cover. It can be stretched over the interior and fastened to the body with straps. It can be divided in the middle with the help of a zip to free the driver's seat only, for example, which should stop squabbles between husbands and wives. Water drainage channels in the vehicle floor ensure that water is channelled outside. The seat surfaces also have water drainage channels and all interior equipment has a waterproof coating. Kind of makes you want to throw a bucket of water over the thing just to see how it reacts.

Other electric vehicles coming to the Geneva Motor Show are not going to be as extreme as the smart forspeed. Rolls-Royce, for example, has announced it will unveil a 102EX, a one-off, fully electric powered Phantom. It looks like a Phantom but the question remains if it will drive like one.

Land Rover is also bringing a concept electric vehicle to Geneva. The Electric Range e is a plug-in diesel hybrid but is only a demonstration vehicle at this point. It is likely to come to market in the near future. It will feature a 3.0-liter TDV6 diesel engine, a small electric motor, and plug-in hybrid technology. It has an estimated range of 20 miles on the batteries alone, which is more than the Toyota Prius plug-in at 13 miles.

Other companies have recently introduced electric vehicles in advance of the Geneva Motor Show. Volvo has unveiled plans for a plug-in diesel hybrid version of its V60 station wagon that will go on sale in Europe in 2012.

BMW announced plans yesterday for its new sub-brand BMW i, which will be its electric vehicle line. In 2012 it plans to introduce the BMW i3 and BMW i8. The latter will be a plug-in hybrid. The i3 is a pure electric vehicle and was previously known as the Megacity vehicle.

The future of electric vehicles is real but the question remains what will become of the smart forspeed concept electric vehicle. It may end up just being a historical oddity or it could become the halo car that brings smart back to life in the United States.