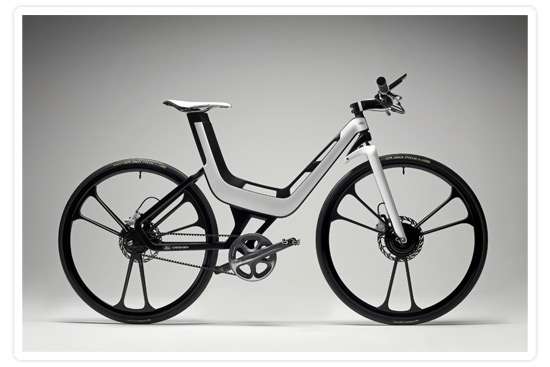 Somehow to the powers-that-be at Ford it made sense to introduce its new eBike concept, an electric bicycle, at the Frankfurt Auto Show, which runs through this Sunday, Sept. 25. Introduce an electric bike it claims it has no plans to build,
Advertisement

Actually, automotive historians might appreciate the irony of Ford introducing an electric bike like the E-Bike at an auto show because Ford’s success can ultimately be tracked back to electric cars and bicycle shops around Detroit and even Hartford, Conn., at the turn of the 20th century.

But more on the history lesson later. Let’s first look at the Ford E-Bike that was introduced in concept form at the Frankfurt Auto Show. Here’s the most interesting thing. It’s solely a design exercise. Ford has no plans to get in the bike business. As it said in the official statement, “Designed to show how the company's design language can translate to a bicycle, the Ford E-Bike Concept also demonstrates the spectrum of Ford's electric mobility competence. Ford has no plans to produce the E-Bike but will continue studying the concept along with other future mobility solutions.”

Sure, because we were all wondering how Ford’s design language can be translated to a bicycle. After all, if Hyundai says its new Veloster is inspired by a motorcycle, why not have a car company design a bicycle.

So, what would this bicycle be like if it were to be built? Well, because it’s a concept, it would be fantastic, of course. According to the announcement, the power is provided by a drive system consisting of a motor in the front wheel hub, a lithium-ion battery concealed in the frame, promising a range of up to 85km on a full charge, an integrated controller and patented magnetostriction sensor technology from the world of Formula One.

That’s right. Forumla One technology and lithium-ion batteries that one finds in hybrid motors come together to make the Ford E-Bike. Magneotostrictive materials are used to convert magnetic energy into kinetic energy, and vice versa. In Formula One, these sensors help handle high engine revolutions in combination with intense thermal strains. They need no physical contact with other parts of the engine, are temperature-independent and are completely maintenance-free.

The drive system is complemented by top-of-the-range bicycle components, including a Shimano Alfine 11-speed internal gear hub and a 2012 Shimano Rapidfire shifter. In place of a traditional chain is a Carbon Belt Drive System, making for a cleaner, lighter and more immediate transfer of energy.

At the heart of the design is a trapezoidal frame profile. Constructed from aluminium and carbon, the frame combines outstanding strength with a weight of just 2.5kg. The wheels, with a six-spoke V-design, appear to float around the frame, while the drive system is hidden from view, creating a clean, minimalist appearance.

But if Ford has no plans to create the E-Bike, why is it planning a future iPhone application for the bike? That could make one think the E-Bike is a possibility as a “future mobility solution” as Ford puts it. After all, it goes 50 miles on a charge. That sounds more like a possible suburban commuter possibility.

So, still wondering about the historical perspective of all this? Most automotive manufacturers got their starts as bicycle builders in the 1890s. Then the electric motor came along and some built bicycles while others built electric cars. Electric cars were extremely popular with high society ladies when first introduced.

A burgeoning industry was begun and electric cars were actually best sellers for while. Finally, though, Detroit won out (otherwise my birthplace Hartford, Conn., might be the automotive center of the world) with its internal combustion engines. It has taken Ford more than 100 years to come full circle back to electric bikes. Not that’s it going to build them but just in case this is what a Ford E-Bike might look like.