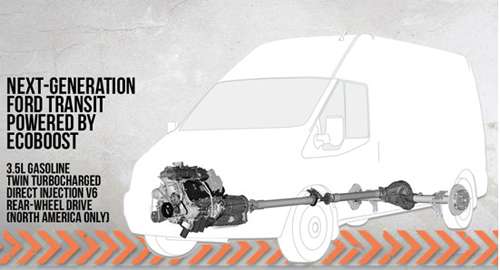 Ford Transit Commercial Van Gets EcoBoost Engine in US

Ford has announced that the Transit Commercial Van going on sale in 2013 will be powered by a 3.5-liter EcoBoost V6 engine when it debuts.
Advertisement

Ford has supplied neither prices for the Ford Transit Commercial Van nor fuel economy numbers. Those should come closer to launch of the vehicle in 2013.

“The new Ford Transit commercial van will deliver all the capability and capacity that customers get with today’s E-Series, but with the bonus of improved fuel economy and potentially lower operating costs thanks to its available EcoBoost engine,” said Tim Stoehr, Ford Commercial Truck Marketing manager. “This engine has revolutionized the half-ton pickup segment for F-150 and we’re expecting it will have the same effect on commercial vans.”

Ford says EcoBoost engines are fundamental to the Ford strategy of providing technologically advanced, high-output, smaller-displacement powertrains that deliver "exceptional fuel economy" and uncompromised performance for millions of drivers around the world. By 2013, Ford plans to produce up to 1.5 million EcoBoost engines globally in a wide variety of vehicles from small cars to trucks.

On the surface that is fairly respectable. Over the course of a year, according to EPA numbers, the average consumer would save But – and isn't there always a but? – the Edge EcoBoost costs a $1000 more. Your fuel savings are going to be $231 annually, which means EcoBoost doesn't start paying for itself until the fifth year of ownership.

Here's another "but" to add. The EcoBoost is an amazing engine. It needs to show greater than 10 percent fuel economy savings to truly wow the car-buying public, though. Get improvements in the 15 to 20 percent range and it's a whole new ballgame.

• A high-pressure direct-injection fuel system fed by a common rail that delivers a precise amount of gasoline in the exact spot for fast and complete burn
• Turbocharging to create a denser mix of air and fuel in each cylinder
• Special pistons with optimized bowls in the center to improve combustion efficiency. These pistons are also oil-cooled, which reduces in-cylinder temperatures
• Reduced CO2 emissions and excellent fuel economy compared to V8 engines with similar power ratings

The current-generation Transit van is the best-selling van in Europe. Ford has sold more than 6 million Transits across five continents since its original launch in 1965. The Transit is currently offered to global customers in a variety of cargo, passenger and chassis cab configurations with a choice of efficient diesel engines. In 2010, the 6-millionth Transit rolled off the production line in Turkey. Conceived as Ford’s first pan-European product in the mid-1960s, the next generation Transit will become a global asset with the availability of the full-size rear-wheel versions in the US.

To get ready for production in the U.S. by 2013, Ford is investing $1.1 billion in its Kansas City Assembly Plant, where the Transit will be built alongside the F-150. No information is available on price yet for the EcoBoost equipped Transit Commercial Van.

Aaron Turpen wrote on March 5, 2012 - 8:34pm Permalink
"Here's another "but" to add. The EcoBoost is an amazing engine. It needs to show greater than 10 percent fuel economy savings to truly wow the car-buying public, though. Get improvements in the 15 to 20 percent range and it's a whole new ballgame." Err... this is a COMMERCIAL vehicle meant for business use. Name a 3/4 ton vehicle of any type that gets this kind of mileage without going full hybrid and you have a winner. This van will be competition for the Mercedes Sprinter (think American Pickers) and vehicles like that. The average American family won't be buying these. Now the real question is: will this van be offered in various other fuel options like the smaller Transit Connect is? That van is available in CNG, gas, diesel (Europe only), and electric.
Frank Sherosky wrote on March 5, 2012 - 9:00pm Permalink
What this country needs is the next-gen IC Engine. That's either the HCCI, the split cycle or the Cyclone Power external combustion engine that recirculates steam. How much longer must we wait for the evolutionary step? That's not all, though. Reducing body weight would help every propulsion system. When will we have aluminum body structures? This baby step mentality of the OEMS has to change if they want to make a real difference.