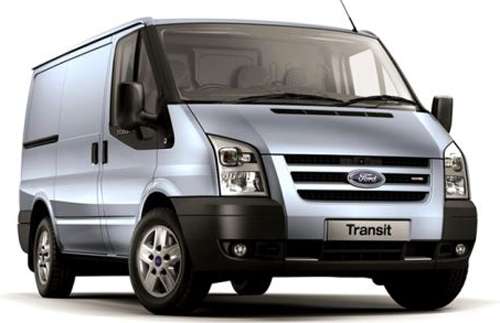 Ford has made the unexpected announcement that the new Ford Transit cargo is going European as in it will actually have a diesel option – but you're going to have to wait. No Transit cargo van is going to be available until 2013.
Advertisement

Ford said it made the decision to add the diesel engine to "meet diverse needs in the full-size van segment," according to a news release. It is calling it an all-new North American diesel engine option.

Ford had previously announced that the Transit Commercial Van going on sale in 2013 will be powered by a 3.5-liter EcoBoost V6 engine when it debuts.

Ford has supplied neither prices for the Ford Transit Commercial Van nor fuel economy numbers. Those should come closer to launch of the vehicle in 2013.

Ford has also announced a new tool for its fleet customers – bound to be the largest segment for the Transit cargo van – called the fleet emissions calculator. It is a specialized new tool to help optimize fleet purchases based on specific fuel types and operating locations, according to Ford.

In a press release, the company said, "Called the Vehicle Emissions and Fuel Cost Calculator, the new tool is designed to help fleet customers understand their current carbon footprint and to model various scenarios based on the types of vehicles they choose for their fleets. The tool incorporates important information to evaluate fuel costs and emissions, providing a unique opportunity for fleet managers to quickly evaluate multiple options."

The new calculator is going to look at things like vehicle, fuel, and traffic conditions (such as if the vehicle is going to be used mostly around town or on the highway). The calculator will also take into consideration where the vehicle is going to be used. For example, the tool can demonstrate how operating an electric vehicle in Portland, Ore., has different environmental ramifications from operating one in Philadelphia. This is due to hydropower being a common source of electricity in the Pacific Northwest, reducing carbon dioxide emissions, compared with the mostly coal-based electricity used in the East Central region.

The proprietary program, which must be used in conjunction with the support of a Ford representative, will create customized scenarios for customers by using special formulas and variables to determine the environmental impact and fuel costs of specific vehicles.

“This tool will help our customers make the most informed purchase decision possible – one that will meet their business needs, help promote energy security and help protect the environment,” said Sandy Winkler, senior researcher with Ford Research and Innovation and developer of the tool.