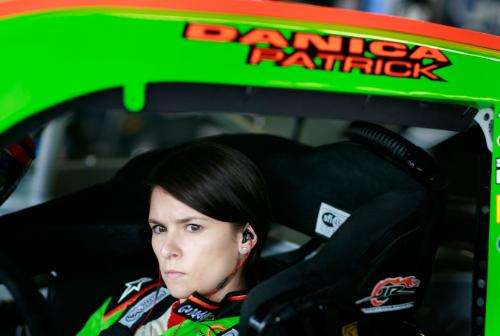 Danica Patrick, who can be considered among the most famous female drivers in racing history, has announced she will kick off her NASCAR Sprint Cup Series in 2012 at the prestigious season-opening 54th annual Daytona 500 on Sunday, Feb. 26.
Advertisement

Patrick, who will compete full time in the NASCAR Nationwide Series with JR Motorsports in 2012, announced on Friday afternoon that her limited Sprint Cup Series schedule with Stewart-Haas Racing will kick off with "The Great American Race."

*Two other races are to be determined.

"Each year, the Daytona 500 produces unforgettable moments that forever change the lives of fans and drivers," Daytona International Speedway President Joie Chitwood III said. "As Danica embarks on her first start in 'The Great American Race,' she may want to talk with 2011 champion Trevor Bayne, who might be able to share some pointers for first timers. We wish her well and are excited about her participation in the NASCAR's biggest and most prestigious event – the Daytona 500."

Danica Patrick is racing this weekend at the NASCAR Sprint Cup Series Race at Texas Motor Speedway where she has qualified in 11th at 184.370 mph Saturday's O'Reilly 300 Nationwide race. Check out tomorrow's race at 12:55PM (EST) on ESPN2.

She will become just the third woman to compete in the Daytona 500 when she takes the green flag in February. Janet Guthrie made two Daytona 500 starts in 1977 and 1980, finishing 12th and 11th respectively. Shawna Robinson finished 24th in her lone Daytona 500 start in 2002.

Patrick made her stock car and NASCAR debuts on the storied 31-degree high banks at Daytona International Speedway during Speedweeks 2010. She finished sixth in the Lucas Oil Slick Mist 200 ARCA race and 35th in her first Nationwide Series race. Most recently at the "World Center of Racing," Patrick led five times for 13 laps in the Subway Jalapeno 250 Powered By Coca-Cola Nationwide Series race in July before getting caught up in an incident in the tri-oval coming to the checkered flag and finishing 10th.

Tickets for the 54th annual Daytona 500 on Sunday, Feb. 26 as well as other Speedweeks 2012 events can be purchased online at www.daytonainternationalspeedway.com or by calling 1-800-PITSHOP. New for the 2012 Daytona 500 is special youth pricing. Children 12 and under will receive 50 percent off all Superstretch grandstand seats for the Daytona 500 with the purchase of an adult ticket. The special offer expires Feb. 1.