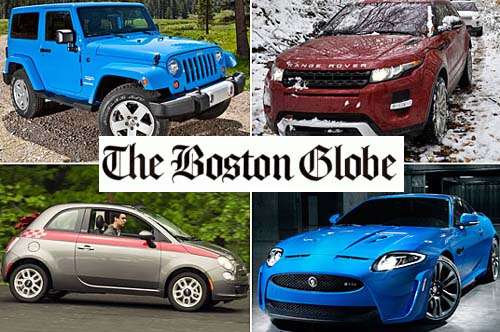 The Boston Globe is out with its list of the Top Drives for 2012 and it's a surprising collection of luxury vehicles, hard working pickups and sport utility vehicles and a brand (Kia) that just two years ago would probably be on no publication's top drives list.
Advertisement

The Kia Optima made the list of top drives for 2012 (a strange name considering the list looks back at cars driven in 2011) because the Globe editors, Cliff Atiyeh and Bill Griffith, found that the Kia Optima “has achieved a metamorphosis from unremarkable to a first-class, five-passenger, mid-sized sedan.”

In the spirit of full disclosure, I should mention that I write for the Boston Globe auto section but that doesn't mean I'll give the list a complete free pass. The editors should have actually picked the Optima Turbo. It's an amazing sports sedan for not a lot of money.

Also, when it comes to the list, maybe in the liberal enclave called Cambridge, Mass., is a Fiat 500 a Top Drive for 2012 but not in the real world. It just doesn't work (as reflected by anemic sales numbers). The scion iQ that is on sale now in California is just going to blow the doors off the Fiat 500.

Otherwise, the list is pretty solid. Here are the remaining vehicles on the list along with some comments by the Globe editors as well as one or two thrown in by your faithful TorqueNews correspondent.

Audi A7
TorqueNews publisher Armen Hateyan reviewed the Audi A7 and loved it. Who am I to quibble?

Acura TSX Sport Wagon
TorqueNews adds: Give the guys props for including a station wagon on the list. It's not a bad wagon. Calling it a sport wagon might be optimistic but the world needs to preserve station wagons.

Ford F-150
With the turbocharged Ford F-150, veteran Globe editor Bill Griffith was “impressed with the EcoBoost’s performance as well as the truck’s interior finish, quietness, and refined ride.” TorqueNews adds: Buy no Ford without an EcoBoost engine. It's amazing.

Subaru Impreza
The new Subaru Impreza was surprising for its improved fuel economy and interior room. “When you then consider the standard all-wheel-drive and Subaru’s traditional reliability, you’ve got a first-rate entry in the compact category.” TorqueNews adds: Let's not overlook the fact that it's a less powerful engine but somehow a lot more engaging. This is a winner of a sedan.

Jeep Wrangler
Even the hardcore Jeep Wrangler and its new powertrain drew strong remarks. “Everything that made the Wrangler difficult to love and live with is gone,” wrote editor Clifford Atiyeh. TorqueNews adds: Cliff knows from where he speaks. His significant other drives an old Wrangler.

Ford Focus
TorqueNews adds: This really is a world class compact car. Others try to compete against it but the Ford Focus continues to set the bar for style and performance.

BMW X3
TorqueNews adds: Until this generation of the BMW X3, this was never a good crossover. The second generation version gets it done right.

One thing about the Boston Globe reviews is the editors are not gear heads. They love cars and know them inside/out. However, they don't do 0-60 tests with instruments strapped onboard. Instead, they live with the vehicles in New England, which can be among the toughest environments for cars. I've had 50-degree swings in one day, driven vehicles in 100 degree heat and below 0 all without leaving Connecticut.