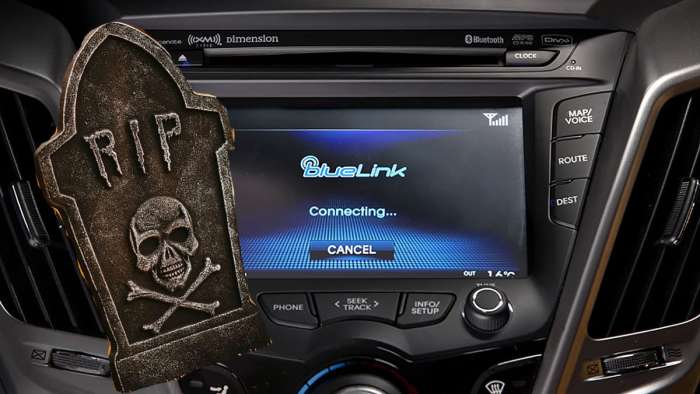 By the end of the 2021, Blue Link will be a dead feature in older used Hyundai models and nothing can be done.
Advertisement

Hyundai has notified Blue Link subscribers come Dec. 31, 2021, the popular feature will be no more in used models. It’s a victim of the advancement of 5G across the nation.

In a message to subscribers, Hyundai says the wireless provider of the network behind Blue Link will discontinue 2G service. Without it, Blue Link becomes a shiny brick in the middle of your dashboard.

A Hyundai spokesperson told TorqueNews, “These cellular networks are maintained by wireless service providers outside the control of Hyundai and Hyundai Blue Link. We regret any inconvenience this may cause.” He added it’s due to changes in telecommunications technology over time. The company wouldn’t say if there are any alternative out there for Blue Link customers in this situation. There appears to be no hardware or software that can fix the problem. Simply put, Blue Link’s time of death in older Hyundais appears to come New Year’s Day.

The cutoff appears to be 2016 models and older. Models from 2017 onward have the 3G service but it begs the question: when do those models become technologically obsolete?

On one Reddit forum, commenters expressed dismay over losing one of the Blue Link’s most popular features: the car finder feature. It’s not so much for the ability to find the car in a mall parking lot as it is to recover their Hyundais if stolen.

One Reddit poster said, “I live in Chicago where carjackings are significantly increasing so it was nice insurance to track the vehicle and have Blue Link cut the car off with a police report. It’s making me reconsider keeping the car now.” That raises an important caveat for buyers and sellers of used Hyundais. This changes the value of used Hyundais. Factor that in when setting a price or making an offer. Unfortunately, it also affect trade-in value so that Chicago Reddit poster faces some issues beyond the lack of technology.

Blue Link turns 10 this year (and I wrote about it a decade ago). It’s been a popular feature. At its 5th anniversary, Hyundai said in its first years, Blue Link handled more than 90,000,000 requests from customers. Subscribers remote started their Hyundai’s more than 22 million times and remotely locked the doors more than 2.5 million times.

What do you think? Does losing Blue Link on older Hyundais make them less appealing? Do you use Blue Link? Comment below.