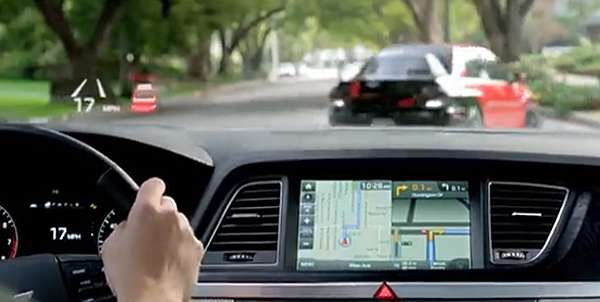 The hits just keep coming for the 2015 Hyundai Genesis that debuted to the media last week in Arizona and is now on sale at dealers. This award is one of the most specific you're going to ever read about.
Advertisement

Ace Metrix, a leading provider in television and video analytics, said the 2015 Hyundai Genesis spot was the second most effective advertisement in the year’s first quarter of the Super Bowl. “Dad’s Sixth Sense” earned 706 points on the Ace Metrix scale, making it the third highest scoring ad of all time, according to the firm.

In fact, Hyundai was only bested by a Microsoft commercial. It was so effective that 10 weeks later, I have absolutely no recollection of that ad.

But I do recall the Hyundai Genesis ad. (Click here to watch the ad.) As Hyundai recounts, “'Dad’s Sixth Sense' dramatizes the near misses and breathtaking saves of everyday parenting. The action follows a young boy as he grows up, and Dad is there for him again and again. The commercial culminates with a final breathtaking save – only this time, it’s the all-new 2015 Hyundai’s Genesis that has the young man’s back. The commercial features the song, 'Count On Me,' from Bruno Mars and highlights the innovation behind the Genesis’ world-class suite of Sensory Surround Safety features."

Frankly, I didn't think it was a great commercial because it showed the dad, presumably taking his young son out for a driving lesson, not being that attentive. He misses the car backing out of the driveway just like the son who is distracted by a pretty girl. And, is it a comment on Subaru's safety record that a WRX-STI (or maybe it's a Mitsubishi Evo) carelessly backs out of the driveway?

Of course this just proves I don't know much about marketing. This commercial resonated third best ever with the viewing public – so you can't get much better than that.

By the way, a high ranking in the first quarter is considered vital because that's when Super Bowl advertising is considered most effective. People aren't drunk yet. The game is usually still close. And, people don't have to start getting the half-time spread ready until the second quarter.

What do you think of the ad? Is one of the most emotionally effective Super Bowl ads of all time as Ace Metrix claims?