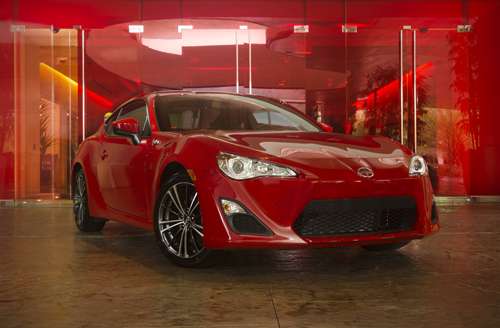 It's bound to become an instant classic – that's how great of a car it is. The best part? It has a starting price below $25,000 when equipped with the six-speed manual transmission. The six-speed automatic is about $1300 more.

This kind of performance at this low of a price just hasn't been seen in a long time. As Scion VP Jack Hollis pointed out during a media introduction in Las Vegas, "The FR-S allows us to reach a whole New Dimension of performance. It’s a sports car that pound-for-pound and dollar-for-dollar is already igniting the passion of a whole group of car fanatics."

Let's look at that pound-for-pound sentiment. The 2013 Scion FR-S is powered by a 2.0-liter, naturally aspirated four-cylinder Boxer engine that uses Toyota's cutting-edge D-4S injection system (and is found in the Lexus IS F, a compact luxury performance sedan that is on my bucket list of cars to own some day).

This little engine produces 200 horsepower but a surprisingly mundane 151 lb. ft. of torque. Its 100 horsepower per liter puts in supercar territory in terms of performance. Scion officials said its torque deficiency (my term – not theirs) comes from the fact that this car was not built just for linear performance. But it's quick off the line with a published time of 6.2 seconds, according to Motor Trend. http://www.motortrend.com/

Handling is fantastic. Scion set up an autocross course and encouraged us to try the FR-S with all the traction control systems in place. Then it was placed in a sport setting that reduces vehicle stability control and finally with everything shut completely off. Thanks to a low center of gravity, even with all the traction devices shut down, the FR-S was nimble through the autocross and delivered the best times when the electronic nannies couldn't interfere.

However, that's not to knock stability and traction control. Both are proven lifesavers and a parking lot autocross course is a far cry from a slick interstate highway overpass coated with black ice.

The FR-S’s interior includes a 2+2 seating configuration that is designed with both form and function in mind. The comfortable front seats feature deep bolsters and are mounted low, while the rear seat folds down flat, creating flexible space. I didn't have any car seats with me in Las Vegas but I'm confident they could be installed with a little effort. Adults and taller children may find sitting behind anybody taller than 5'9" uncomfortable.

The large center-mounted tachometer is the focus of the three-gauge cluster and features a programmable shift-indicator, which has an indicator that lights up when redline is reached. The driver can set the warning to go off in 100-rpm increments, starting at 2,000 rpm. A chime can be programmed to sound when redline is approached. Speed is monitored by both digital and analog gauges.

Frankly, after spending time behind the wheel on local roads around Red Rock Canyon, the speedometer could use some chimes. This is a car that hits 85 mph with a disconcerting lack of outside noise. It's the type of car that is going to get its drivers into trouble because the ride is that good.

Some other journalists thought the interior was lacking somewhat but that confused me. After all, this is still a Scion. It's not a Lexus. Plus, sacrifices have to be made sometimes in a sports car. Sure, the quality could be a little better but it's not going to be in a car costing this much and delivering this much performance.

By the way, some of you might know this is a car jointly developed with Subaru. The two Japanese manufacturers had a capital relationship and decided to produce a car together starting back in 2007. The inspiration for the jointly produced car came from Toyota's AE86 generation of the Corolla, better known as the Hachi-Roku, meaning “8-6” in Japanese. The AE86 was a front-engine, rear-wheel-drive coupe that was lightweight and well balanced, making it a solid choice for driving enthusiasts when it was sold from the late '70s to mid-80s.

Basically it's Subaru's Boxer engine combined with Toyota's fuel injection system. (Just to demonstrate how long it takes to get a car to market, it's 2012 and both the Subaru BRZ and the Scion FR-S are on the market.)

What's the difference between the two? Some external styling cues but both have the same engine. Also, the Subaru is going to be more expensive with a starting price of $26,245. Unlike the Scion, which starts at $24,200, the Subaru has different pricing options. The Scion is being sold as mono-spec, which means one price. Dealers will sell a la carte performance items for installation. The one-price offering is keeping with Scion's no-haggle approach to pricing.

FR-S comes standard with six airbags, including dual-stage advanced driver- and front- passenger airbags, front-seat-mounted airbags and side-curtain airbags. One wonders why the much-smaller Scion iQ gets 11 airbags. Maybe it's a weight issue.

Got an itch for a sports car but still need a daily driver? The Scion FR-S is a wise choice to consider. It's just a great little car that should sell like gang busters when it hits dealers at the beginning of June.