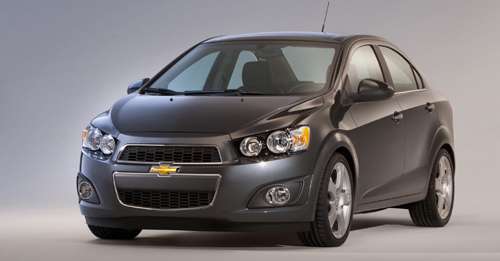 The EPA has rated the 2012 Chevrolet Sonic 1.4-liter turbo at 40-mpg highway, giving it access to an ever-growing class of compact and sub-compact cars breaking the 40-mpg highway barrier for gas engines.
Advertisement

The 2012 Chevy Sonic’s 40-mpg highway fuel economy makes it one of the most fuel-efficient small cars in the market, on par with the 2012 Ford Fiesta SFE and the 2012 Hyundai Accent. The Hyundai Elantra also hits 40 mpg as does the Hyundai Veloster, when equipped with a 5-speed manual transmission. There are other vehicles that hit 40 mpg but they are either hybrids, electric vehicles or diesel equipped.

Along with getting 40 mpg, the 1.4-liter turbo Chevrolet Sonic can reach 60 mph in 8.2 seconds. That's fairly fast for an econobox but no word from the EPA on what the fuel economy numbers are like when the accelerator's being mashed for optimal performance.

“Sonic changes the sub-compact stereotype and puts an end to the term ‘econobox,’” said Joaquin Nuño-Whelan, Sonic vehicle line director and vehicle chief engineer. “The 1.4L turbo saves money at the gas pump and is a ridiculously fun car to drive. So, our buyers are getting a safe, exciting and fuel efficient car at a great price with the 1.4L turbo.” That price for those of you keeping score at home would be $16,760 as reported in the TorqueNews article: The 2012 Chevrolet Sonic configurator comes online.

The 2012 Chevrolet Sonic, which also is available with a normally aspirated 1.8-liter, inline four cylinder engine, is Chevrolet's desperate attempt to make the North American market forget all about the absolutely dismal Chevrolet Aveo. Just like Jerry Lewis, though, the Aveo continues to absolutely thrive in other parts of the world.

The Chevy Sonic’s 2012 1.4-liter Ecotec turbocharged engine is SAE certified at 138 horsepower (103 kW) – 18 horsepower (14 kW) more than Ford Fiesta and is essentially the same engine used in the Chevrolet Cruze in a smaller, lighter package designed for a greater feeling of performance. The turbo engine is also rated at 148 ft.-lbs. (200 Nm) of torque between 2,500 and 4,900 rpm. The wide rpm range for the maximum torque – a specific trait of turbocharged engines – helps the engine deliver a better driving experience and performance.

Also, at more than 100 lb. ft. of torque per liter, the 2012 Sonic can be considered a zippy car. It's almost surprising that its 0-60 times aren't a little better but that could have more to do with the vehicle's 15-inch wheels.

All models feature a MacPherson strut front suspension with coil springs and stabilizer bar. The rear suspension consists of a semi-independent, torsion beam axle-mount compound link-type design – featuring a tubular V-shape beam – with gas-charged shocks. The front and rear tracks are identical at 59.4 inches (1,509 mm), for well-planted stability and balance.

Electronic power steering is standard, and eliminates the need for steering fluid and a pump needed with hydraulic systems. It features a wear compensator that continually adjusts the system interaction with the steering gear to ensure precise steering action over the life of the system.

Chevrolet Sonic’s body structure is designed to be one of the stiffest in the segment and its rigidity enabled engineers to tune the ride and handling more precisely. A unique “flat top frame” cradle assures optimal stiffness in the front chassis portion of the vehicle.

The rear axle is essentially a straight axle without contour for packaging restraints and reduced noise, vibration and harshness. A range of wheel sizes is available, including 17-inch wheels and sport tires.