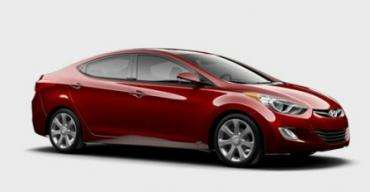 Hyundai is pushing back hard against claims that customers are not happy with their fuel economy in the 2011 Hyundai Elantra, which is enjoying strong retail sales so far in 2011.
Advertisement

In what would be a relatively routine announcement about Hyundai Elantra retail sales doing well, Hyundai made a point of including this statement: “Elantra owners happier with real-life fuel economy than all competitive owners in segment.”

Hyundai said in the release that was sent to TorqueNews,” … no customers in the compact car segment are as happy with their real-world fuel economy as Elantra owners as measured in a recent JD Power APEAL story that examines how gratifying a new vehicle is to own and drive, easily out-pacing strong competitors like the Ford Focus, Chevy Cruze and Honda Civic.”

A consumer group called Consumer Watchdog claimed in a story previously reported on TorqueNews that” they’re receiving numerous complaints from consumers who are only achieving an average MPG in the mid-20s.” The group called for the EPA to retest the Elantra and accused Hyundai of being misleading in its mileage claims – in spite of the fact that Hyundai didn’t create the numbers. They’re based on government research with the standard disclaimer that customer’s experiences may differ.

Now back to the issue of retail sales. For years, Hyundai’s sales numbers were pumped by fleet sales but that’s no longer the case as the company doesn’t have to rely on sales to rental car companies to boost the bottom line. That’s partially reflected in the Elantra that has won the ALG residual value award in the Compact Car segment for the second year in a row in the U.S. ALG, the industry benchmark for residual values and depreciation data, annually recognizes automakers’ achievements in producing new vehicles that are predicted to retain the highest percentage of their original price, after a conventional three-year period. Elantra is going to be worth more in three years from now than any other car in the segment.
Hyundai has already sold more Elantras in North America this year than it ever has (216, 331 v. 151,735, a 43 percent increase), a high point for the Elantra model line in a record-setting year for Hyundai in both the U.S. and Canada. And in the U.S. alone, Elantra sedan retail sales are up 91 percent this year compared with 2010.

“Elantra has been an absolute phenomenon in the compact car segment,” says John Krafcik, Hyundai Motor America President and CEO. “In November, Elantra retail sales were up 37 percent, in spite of significant competition from all-new entries such as the Chevy Cruze, Ford Focus and Honda Civic.”

In Canada, too, the Hyundai Elantra has had a record year. By the end of November, Elantra already has achieved its best-ever year of sales and was a major factor in helping the company achieve year-over-year sales gains for 35 consecutive months.

Customers will ultimately speak with their wallets on the fuel economy issue but it appears for now that retail sales are going to remain strong for Hyundai, which is primed to blow away its one-year sales records as previously reported on Torque News.

Toyota's First EV Will Have a Name of BZ: Toyota BZ
First Videos From Inside The Boring Company's Las Vegas Loop
END_OF_DOCUMENT_TOKEN_TO_BE_REPLACED