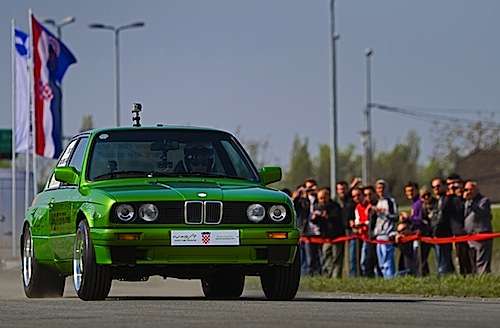 Who Has The Fastest Electric Car?

With the surge of electric car being built, designed and produced, it’s a wonder we only talk about range. So, guess who has the fastest electric car currently?
Advertisement

When we talk and write about electric cars, EV the phobia centers around range and what potential EV drive expect they will need in terms of range. When you compare their expectations to the average daily commute in the U.S., the numbers contradict each other. 80% of our daily commute is 40 miles or less, something almost any electric car can offer, even the entry level ones. Price and range are logically moot point, but are still a preconceived emotional barrier. But, what about speed and how fast?

Old “Green Monster”. You might not have heard about the affectionately dubbed “Green Monster”, now known as e-M3 but you might have heard about its owner. The founder of the performance mouth dropping Rimac Concept_One electric supercar, Rimac Automobili currently owns the fastest EV, see our fellow writer Denis Flierl’s Rimac Concept One tears up the track article and video. You won’t believe which electric car is current the world’s fastest. In this case, his converted BMW E30.

Technically Speaking. This electric BMW puts out a generous 600 HP with no less than 664 lb-ft of torque. It sprints the 0 to 60 in 3.3 seconds and has a top speed of about 174 mph. To show that range, speed and raw horsepower is actually achievable, albeit, as with anything this good, it comes at a price, this amazing setup still manages to pack a respectable range of 112 miles. 600hp, 664 Lb ft, 174 mph with 112 range!

Breaking Records. Rimac has already tried to break records, and in 2011 he used military runway in Croatia. The FIA has officially recognized this year that Rimac broke two records and can now call the e-M3 the fastest accelerating electric vehicle alive. The e-M3 sprint the 1/8-mile in 7.549 seconds and the 1/4 mile in 11.808 seconds, and the 1 mile in 35,347. This sets the world record in the Category A, Group VIII for electric vehicles in Class 3, those above 1,000 kg, 2,204.622 Lbs. If this was enough, several other records are being awaited, such as the 23.26-second kilometer run.

What About The Rimac Concept_One? It would make perfect sense to see the company wanting to break its own records with its up-coming 1,088-hp Concept_One electric supercar. After all, what better advertising than to claim your new electric car beats the world record of your previous EV? According to the company, the Concept_One should break the 0 to 60 MPH in 2.8 seconds. As to the question when? Rimac is optimistic they will deliver 88 limited edition before the end of this year.

According to Rimac: "I owned an old BMW E30, which I used for drift and circuit races. At one of these races, the gas engine blew up. Then I decided to try building an EV. After one year or so the car was able to drive, but I was not satisfied with the result. It was heavy, not very powerful and the range was very limited. I started to gather a team of experts to develop our own components since I believed that the electric propulsion can give much more compared to what was available on the market. At that time, I already had a very clear vision of my ultimate goal. Today, hard work is making my dream come true."

More than just raw power and speed, Rimac reminds us of what makes an industry and a country what it can be, that certain entrepreneurial spirit. Sure Rimac could have stopped after his BMW gasoline engine exploded. He might have even rebuilt one, as so many do. But he went further, asked questions. Gathered a team of engineers and with a little bit of thinking out the box, developed the world’s fastest electric car using nothing more than an older BMW platform.

Entrepreneurs being who they are, Rimac naturally followed his impulse by building another electric car from scratch, the stunning Concept_One electric supercar. In the meantime, thank you Rimac Automobili for pushing the agenda further with your FIA record and your electric BMW, the “Green Monster” e-M3.