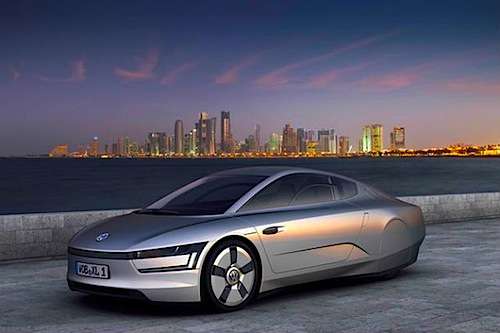 Volkswagen Working Seriously On Plug-In Hybrids With The XL1

While we haven’t heard much from the folks at Volkswagen in terms of hybrids and even less when it comes to plug-in hybrid, the German manufacturer has been testing its intriguing diesel plug-in hybrid.
Advertisement

Call it VW week but the second hybrid news worth of interest this week is again from Volkswagen. In another outlet I wrote about yesterday how the Jetta Hybrid had broken the world’s record of fastest speed on the Bonneville Salt Flats in Nevada clocking in at 185.394 mph. This time it comes from the futuristic sounding XL1 that achieves a very respectable 235mpg. Is VW ready to make a splash in the hybrid field?

VW Refuses CAFE Standards. The German car manufacturer refused to sign new U.S. efficiency fuel ratings stating discriminatory practices. It’s too bad when you consider its XL1 diesel plug-in hybrid gets 235 mpg even if it seems as just a proof of concept. The XL1 would show that VW is serious about hybrid technology, seeing the rest of the industry adopting some sort of electricdrive.

This two-seater that somewhat resembles a more modern version of the GM EV-1 has been around for some time, last shown at the 2011 Qatar Motor Show. It was even test driven and the prototype claimed to deliver no less than 261 mpg on European test cycles. But is VW ready to fully commit to a diesel plug-in hybrid, even if a very limited production of it has been announced late 2012?

Technically Speaking. The XL1 sports a twin-cylinder turbo diesel 800-cc diesel engine putting out 48hp and 88 lb-ft of torque. The extra 30hp electric motor helps the XL1 along a seven-speed DSG transmission. It’s no blazing stallion in the performance department with a 0 to 62 mph in a comfortable 11.9 seconds. Its top speed is limited to 99 mph and the electric-only range is estimated at 24 miles.

While it weighs in at about 1,753 Lbs, the accent here is clearly on aerodynamics and efficiency as we can deduce from its body built with carbon fiber reinforced polymer on an MQB platform. Via Hybridcars.

VW, Where Are You? VW has taunted us for some time with lightweight intelligent plug-in hybrids and all-electric concepts. The company has never been at a loss giving us glimpses of what it can do. It just doesn’t seem to commit to a truly revolutionary plug-in hybrid platform. If the Jetta Hybrid sports some intelligent features, such as stop and go engine activation, as well as the disengagement of the gasoline engine when the car brakes, using regenerative braking to its fullest, it would be nice to see a full production of the XL1 with all of the above mentioned.

We hope VW can prove the naysayers wrong and give a reasonably priced plug-in hybrid system, especially one with an intelligent diesel system on-board. The VW XL1 could be its ticket to clear the confusion as to where the company is going in regards to the electric drive.

Tesla Contemplates A New Strategy for China Retail even As Sales Boom
Jay Leno on Elon Musk & EVs: “I Think He Should Get ... Credit"
END_OF_DOCUMENT_TOKEN_TO_BE_REPLACED