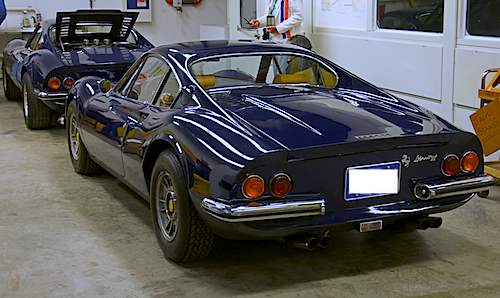 Get ready for another stratospheric price result at this year’s Russo and Steele Monterey Auction 2012. Again the auctions defied any recession logic and proved once more that quality collector car still prime.
Advertisement

There was a time when anything sold. Give it a paint job and call it a collector car, someone will buy it. Proving at the time there was a posterior for every car seat made, the bubble imploded and plenty of so-so cars were left on auction lots. Today, we witnessed a re-evaluation of real collector cars and as it should be, serious classic and collector cars still fetch the highest numbers.

Ferrari, Alfa Romeo, Mercedes & Bentley. No need to look too far to see what sells. Mythical names, such as Alfa Romeo and Ferrari still hold the lion’s share of auction sizzle. Old Bentley racers are highly sought out and the ever-climbing popularity of Cobras seems to be reaching an all time high. Is it too destined for a collector market re-evaluation? Some say so but as long as enthusiasm primes, real Cobras with proven history will continue to go up in price.

The Numbers. The numbers are in and the Russo and Steele Monterey Auction 2012 held at the Fisherman’s Wharf, downtown Monterey, California, showed sales exceeding $10 million. With 250 cars crossing the auction block under Russo and Steele’s hammer, top sales went to the 1965 Shelby Cobra 289 CSX2538 that reached a mind blowing $781,000. This was followed by the 1972 Ferrari 365 GTB/4 Daytona that reached $379,500 proving it too doesn’t stop to be appreciated by collectors. Finally, the 1972 Ferrari Dino 246 GT brought in $363,000.

Here are the top ten sales:

What should jump to your mind watching this result is the low number of pre-war cars, those that normally fetch the most. In fact, the oldest car was a 1953 Chevrolet Corvaire Roadster, which in and of itself is not so much a pedigree car as it is the first in a line that spawned a strong following. Another interesting tidbit is the unstoppable climbing of Alfa Romeo’s great car era that witnessed the re-birth of the company with a lightweight Sprint Veloce.

Great cars will always sell and so-so cars will have to rely on timing and a new wave of unsuspecting collectors. In the meantime, this latest round of record sales by Russo and Steele confirm that unique and pedigree cars always hold their value.