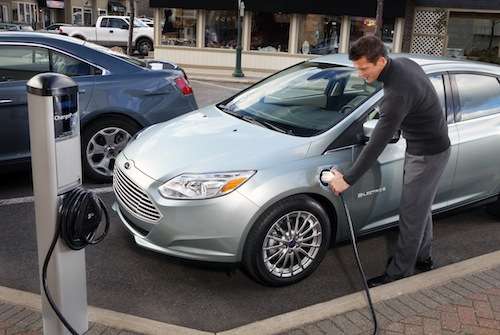 Electric vehicle sales predictions are most often based on nothing concrete. Think twice before listening to unrealistic proclamations.
Advertisement

Does anyone else get the feeling no one knows how to predict anything much these days? This is not only true of the housing bubble burst but also in the alternative energy automobile world. How many times did we hear electric vehicles would save the economy? The problem is that there is no right formula. Worse yet, how can you predict in a wobbly economy?

Car Manufacturers Optimistic, Then Apologetic. After a few years of unbridled enthusiasm, certain carmakers are now blaming anything but their predictions for the current state of their electric vehicle sales. When looking at the sales numbers when hybrids were introduced 12 years ago, electric vehicles, EV and now their plug-in hybrid, PHEV cousins are not doing bad considering the current state of the economy. The only bad thing are the original predictions were based on nothing else but hopeful wishing of past figures and numbers.

Renault Blames Poor Marketing. If you don’t want to blame so-called experts or taxes, you can blame marketing. That’s what Renault is doing, blaming themselves. According to Stephen Norman, Renault marketing head honcho in the UK on autocar.uk: “We need to communicate the autonomy of the vehicles [ . . . ] and let people know more about what they can do. I think people invent constraints the cars don’t have. Our next task is to get up off our backsides and sell them, not talk about what we’re going to be doing in 2030. There are so many messages to transmit on the electric car, we need to make the push." Welcome Stephen to what we’ve been talking about here for a long time. EVs have a market and are perfect for a certain type of clientele. Now go out there and reach out to them.

To be fair, Renault has some enticing EVs, so far 4 of them. A European style commercial van, a sedan, a mid-size sedan and an intriguing one-seater, the Twizy. Think here a direct competitor to the Smart, BMW C1, Toyota iQ and Gordon Murray T25 that packs about 140 miles using a 6.1kWh lithium-ion battery pack with an on-board charger rated at up to 43kW. This charger let’s you charge anywhere from 30mn to nine hours depending on what you feed it.

The CODA Marketing. CODA makes no apologies and Greg Adams, VP of Marketing & Sales gets it right. He told me not too long ago that he wanted to see an electric vehicle in every garage. Then he smiled and said: “Not just a CODA, any EVs!” It was refreshing and made me ask more questions. What surprised me about Greg was that he had done his homework well. Greg knows who the CODA will be sold to and dressed up a profile of his ideal CODA owner. It was well targeted and didn’t try to be the all-in-one solution, good-for-everyone EV.

Pike Research, A Serious Take On EVs. If predictions have been less than stellar in the past, one institution that regularly gets it pretty close is Pike Research. Senior Analyst Dave Hurst at Pike Research said it well: “Sales of EVs have not lived up to automakers' expectations and politicians' proclamations but the market is expanding steadily as fuel prices remain high and consumers increasingly seek alternatives to internal combustion engines.” Putting it into context, AAA released a statement shortly after that gasoline prices were the highest on average for U.S. consumers in 2012.

The latest report talks about electric vehicles of all sorts reaching 3.8 million by 2020. It’s not great, but it’s not bad and it is probably close to the truth. The psychological reactions to that number are both good and bad. It might not enflame passion in the hearts of many and might even lead to detractors saying it won’t work, but on the flip side, it won’t raise speculation on Wall Street, the same ones that have plunged us into financial chaos in the past.

So next time you hear unchecked, over-optimistic proclamations from carmakers or politicians, take it with a grain of salt. Only a few predicted the housing bubble burst in 2004, 98% of the rest was saying otherwise. EVs projected future sales are no different and only a few seem to hit it right. Electric vehicle sales are doing great in light of this economy.