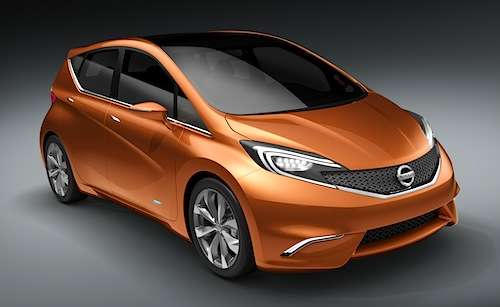 Nissan is slowly revealing the first details of a new hatchback concept, which introduces the company’s next generation of compact cars. With its new car called INVITATION, this dynamic concept due to be unveiled at the Geneva International Motor Show between the 8 to 18 of March will show the company is not only good at building electric cars, as its Leaf did but can also push some of the innovation into this new concept due to be launched by 2013 in Europe.

Design Speaking. The INVITATION is an interesting concept based around an energetic design, with fresh style. The fluid lines are clean and its silhouette shows a clear dynamic potential that promises efficiency. The ‘Squash Line’, which is what Nissan calls the side of the car adds a touch to its profile which brings it its distinctive character. The inside feels open and mixes ergonomics and practicality.

Technically Speaking. Where Nissan shines is with the use of its lightweight platform, topped by an aerodynamically efficient body, which will give the INVITATION good fuel efficiency and low emissions. The company is aiming for an ultra-low CO2 emission target of under 100g/km in order to use its Nissan’s Pure Drive badge. With a responsive and agile handling it makes sense the car will be well received.

The car also features Nissan’s advanced Around View Monitor, AVM safety technology, which aims to take out the stress as much as possible for those who have a hard time with reversing and parallel parking. It also uses Nissan’s Safety Shield Technologies, which interacts with the driving environment and sends the driver feedback of what is happening around the car.

Clearly Nissan is out to keep its momentum going. It is on pace to become the world’s third carmaker. It is also fighting head to head with Mazda which introduced its Mazda active sky system on its cars with great results. Still, after striking it hot with the all–electric Leaf and its well-thought out user experience around the EV, the car maker is not content to leave it that, as it also pushes performance with its regular gas car. Nissan's Invitation holds its name well and should prove fun to drive while easy on the wallet.