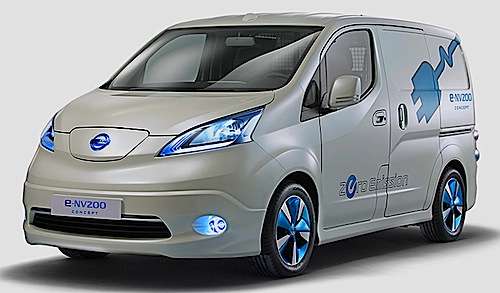 Nissan Gives The Electric Version of Its NV200 A Go Ahead

An electric version of Nissan’s NV200 taxi is being tested in Spain. Nissan plans production by the end of 2013.
Advertisement

It’s official, Nissan presented the electric version of its NV200, the e-NV200 concept in Spain, hailed as the city's next generation clean taxi. The presentation really aimed at the future model’s use for the city of New York, something Nissan won with its regular NV200. Nissan is making a smart strategic move to start building on its electric vehicle legacy and hard earned experience with its Leaf platform, with already more than 43,000 units on the road. Adapting its electric vehicle, EV knowhow to a taxi makes perfect, as these vehicles have predicted little range.

Electrifying The NV200. Electrifying the NV200 makes a lot of sense for fleet owners, and hopefully individuals. The new-generation compact van is well suited for a wide variety of uses and is now available in 40 countries. Nissan has already sold more than 135,000 units worldwide. With positive feedback from customers, its interior space, great fuel economy, the driving performance has been well received and it was awarded the International Van of the Year 2010. What really set it on the radar bleep was when New York City chose it as their exclusive next generation taxi. An electric version is the next logical step for Nissan.

Turning A Car Into Electricity. Nissan has invested over $129 million into it and the all-electric e-NV200 further the company’s zero emissions sustainable mobility plan. Currently, Nissan is working with Barcelona’s City Council's to promote their sustainable mobility plan around the city and metropolitan area. Although Spain has been hard hit by the recession, it has poured tremendous resources into an electric vehicle charging grid with over 250 public points distributed around the city, as well as solar energy. The country sees electric vehicles as a major driver of its economic development and hopefully, its way back to financial health. Let’s not forget that the next EVS, EVS27 will be held in 2013 in Spain.

According to Jordi Vila, Fleet and Commercial Vehicles general manager at Nissan Europe: "With the start of operation of the NV200 Diesel Taxi in Barcelona, Nissan expects to gather information on experiences and expectations of taxi drivers in order to prepare for our next step, the launch of the world's most advanced zero emission compact van, the new e-NV200, which will significantly improve air quality and reduce noise levels in the city".

For its part, Nissan is contributing to the development of infrastructure by having delivered 400 quick chargers for electric cars throughout Europe. These units have been developed by Nissan and meet the CHAdeMO standards. What is different about these new units is that they have been reduced in size and now cost only half as much as they used to.

Nissan has had to weather stormy waters ever since its Leaf battery packs showed the strain and wear in hot climate. The company probably didn’t handle the news as well as it should and had already slowed down its EV campaign by a few months. It sounds as if Nissan was well aware of the limits of its battery pack, especially in such extreme weather conditions as Phoenix, Arizona but decided at first to avoid the topic, only having to address the issue.

In the meantime, turning an already successful NV200 van into electricity for fleet owners and especially limited range taxi owners makes a lot of sense. We look forward seeing these electric version of Nissan’s NV200, the e-NV200 driving around our cities.