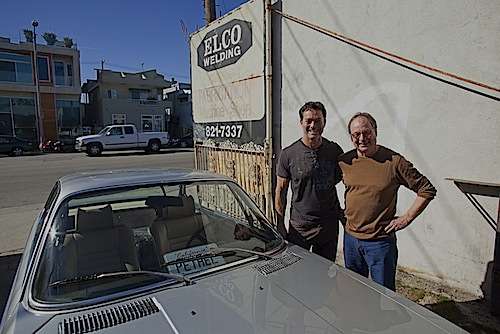 What would you do if you wanted to convert your old BMW to elecricity? Mike Pethel's 1970 BMW CS 800 horespower and 1 mega-watt of energy.
Advertisement

Has John Wayland's 1972 Datsun 1200, the White Zombie finally found a worthy challenger? It could be. Mike Pethel converted 1970 BMW 3.0 CS could challenge the White Zombie. I had an interesting talk with Alex Chadwick who has covered Mike's work; To Build The Fastest ‘Green’ Car on Earth and found Mike has also put a lot of thinking into his electric vehicle, EV conversion.

The Mean Green BMW. Mike Pethel might be a color technologist for the film and TV industry but his mechanical genius, coupled with his racecar enthusiasm made him convert a BMW CS into an electric very high-performance car that goes blistering fast. Mike decided on an unlikely candidate, an early 1970’s BMW 3.0 CS.  His exceptional BMW EV can sprint the 0 to 60 in roughly three seconds, but the beauty with such EV conversions is that he can also drive it quietly over city streets to his workplace, every day of the week.

Technically Speaking. Using two electric motors he designed, Mike used five lithium phosphate batteries, which together generates no less than 800 horsepower with a walloping 1mW of electric raw power. But Mike wasn’t happy with his choice of DC motors and had George Hamstra at Netgain Motors built the perfect DC motor he needed. DC Motors usually have two brushes and Mike decided to add an extra brush and changed their angles from the common 5 to 6 degrees to 90. This resulted in more power and together with the 1mW power coupled to the Lithium-Phosphate, you can see how he fetches 800 HP.

White Zombie vs The Green BMW CS. It would be very interesting to see Mike’s Green Electric BMW go against the White Zombie. The street legal White Zombie uses a lithium polymer battery pack with 22.7 kWh of energy. If I recall correctly, the White Zombie has 400 HP with 1250 ft. lbs. torque and by the way, the range on this EV Datsun is impressive, 90 miles urban, 110-120 miles highway.

BURN Energy Journal. Alex Chadwick covered the story in the BURN Marketplace where he visited Mike Pethel in his Venice, California garage last year. Since then, Mike has finished the EV and as Chadwick’s Marketplace story will reveal on Wednesday, Pethel has more than succeeded with his endeavor.

Here is a quick video of Mike’s EV, courtesy of Hugh Hamilton.

Stay tuned Wednesday on the Burn Energy Journal where Alex Chadwick reveals the final coverage of Mike Pethel’s incredible adventure and the conversion of his early 1970 BMW CS into a furiously fast and power electric car.