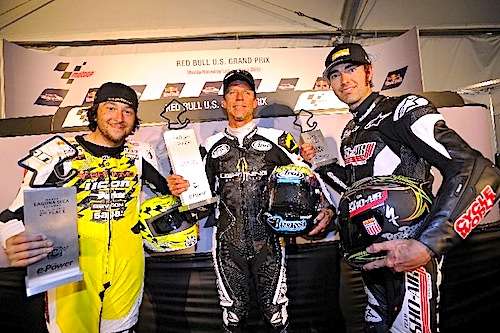 Electric motorcycle racing is where it is, and if you want to find out why electric racing is so exciting, just follow the season.
Advertisement

Hat Tip: Richard from Lightning Motorcycle. It didn't take long for Michael Barnes from Lightning to take the lead in the race. Tailed closely by Steve Atlas and Eric Bostrom, see: Brammo Brings In Eric Bostrom In Time For The Mazda Raceway Laguna Seca Race from Team Icon Brammo, eventually Matthias Himmelmann lead Tom Montano at the end of the first lap and remained there for most of the race.

Women Electric Racers. Lest you should think this is a man’s world, Katja Poensgen, racing for the first time finished sixth on this mythical and very challenging track. She keeps her lead in the FIM e-Power International Championship 55 points ahead of Matthias Himmelmann and Chris Amendt.

The rest of the race saw Robert Hancock, Ely Schless and the three Zero riders, Kenyon Kluge, Ted Rich and Jeremiah Johnson with less powerful batteries. They crossed the finish line with their batteries showing plenty of energy left over at the end of this 32km long race.

What Does This All Mean? Unless you've been living under a rock, electric racing is seriously heating up and electric motorcycles are leading the way. Not only do electric motorcycle endure more than a lap or two of racing, in this configuration and on this track, 9 laps, but that are bringing in some serious international competition. Many of the riders are from the world of internal combustion motorcycle racing and bring in a tremendous amount of expertise from the world of international racing. Mostly, what this does is something no lab tests and experiments can do. This is real, life testing under the harshest of environments, racing and under the Californian beating summer sun.

So, what’s next? The world of electric motorcycle racing has been growing in leaps and bounds over the last few years and shows no signs of letting off any time soon. The Isle of Man is probably still the best event to watch if you are new to the discipline. With a closed road race where locals and international duke it out at full speed, it is a remnant of the heydays of the Targa Florio and other Paris-Nice races. The FIM e-Power International Championship in Oscherleben, Germany will be held on 11 August with the TTXGP Championship. Don’t miss it. And in the meantime, go and see what the fuss is all about with electric motorcycle racing.