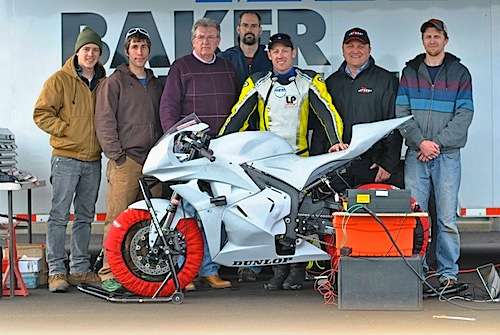 Going up against MotoCzysz, Brammo and Zero Motorcycles on the TTXGP is no small task. A team from the Virginia Tech College of Engineering will bring their home-built electric converted motorcycle to the North American TTXGP eGrandPrIx competition.
Advertisement

Technically Speaking. The 2009 Honda CBR600RR was converted to electricity and weighs in at 385 lbs. The bike, designed, built, and painted by students at the Joseph F. Ware Jr. Advanced Engineering Laboratory will be raced by Matt Kent, an engineer at Goodyear Tire & Rubber Co. and professional racer.

Several years were spent making the successful conversion of this motorcycle to electricity. Using various senior design teams, many of the parts were donated or sold. The AC permanent magnet electric motor was handmade and will be programmed by a controller donated by Kollmorgen’s Radford, Virginia. Sporting a 7.5 kW lithium polymer cell batteries, the pack was bought at a discount rate from Dow-Kokam. You get it, this is a shoestring budget race bike and its performance against companies with more experience will be more than interesting to watch.

The Race. Round Three of the TTXGP race series will start tomorrow in Monterey, California and is a joint competition with Federation International de Motocyclisme, FIM Epower, which was another series that competed for the racing of electric motorcycles. Both TTXGP and FIM EPower have buried the hatchets and joined forces and include 3 regions, North America, Europe and Australia. If the Virginia Tech team finishes in one of the top slots, it will take its the Battery Operated Land Transportation, BOLT team to the Daytona International Speedway this fall. Much rides on the shoulder of tomorrow’s race, since Daytona will be the international event of the year. This race would see the team race against international professionals and determine its future.

Kindly Helped By Sponsors. Of course a race team cannot happen without the generosity of sponsors. With the help from the Areva Group North America, Boeing, Dunlop, General Motors, Lockheed Martin, Penske, Solutia and a dozen others, the bike will be able to race against the new kids on the block.

As for the future of racing for the Virginia Tech College, it looks pretty clear. The college anticipates more races and has already begun to work on a new bike for the 2013 season. The new bike will also a use newer version of the Honda CBR600RR.

The exciting part of electric motorcycle racing, as you can see is that it is a budding field. It is still new, attracts great talents, as I mentioned in my previous piece, Brammo Brings In Eric Bostrom In Time For The Mazda Raceway Laguna Seca Race http://www.torquenews.com/1079/brammo-brings-eric-bostrom-time-mazda-raceway-laguna-seca-race It is something to keep a close eye on, since in a few years, the landscape will have solidified with leading international players in the making. In the meantime, we welcome the participation of the Virginia Tech College in the world of electric racing with its BOLT electric motorcycle racer.