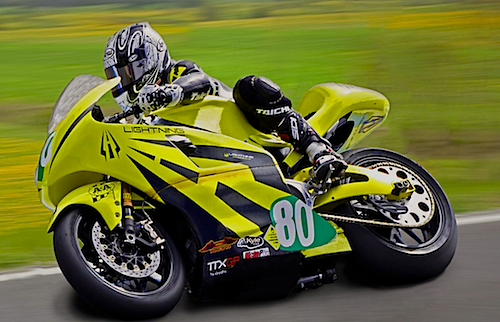 Lightning Motorcycles has THE electric sport bike that will change your mind. If this sounds too wild of a claim the latest test drive and reviews certainly hails this bike as a winner, both on track and on the street.
Advertisement

Richard Hatfield, CEO and founder of Lightning Motorcycles whom I’ve had the privilege to meet in the past is quick to say that electric sport bike will change the minds of anyone who rides one. The Lightning is not only the fastest motorcycle you’ll probably ride, but according to Troy Siahaan on Motorcycle, it is the most performance he’s seen on any bikes, gasoline included. That is high praise indeed. I will have an interview with Richard coming up soon but in the meantime, enjoy his latest talk with CNN.

Those who doubt electric vehicles, EV in general have never driven one. Unfortunately, many never get to experience the thrill of the 100% available torque an electric motor has to offer on a motorcycle. The electric revolution will come through the electric motorcycle that much is sure.

Lightning Hits The Streets. Great news from Lightning, after six years of developing, tweaking and wiping out competition in the electric motorcycle race world, Lightning will market its production street bike soon. Based on its race bike, this bike promises nothing short of impressive performance. The street legal Lightning will have exactly the same internals as the race bike.

Technically Speaking. The street Lightning will be built to order from top to bottom to your heart’s content. This means the actual air and oil cooled 12kWh battery pack raced today will come standard on the street version. An optional 14kWh unit will be available. Torque is being tested with a 22kWh battery, which should strain the mechanics enough to make sure it can handle anything.

Charging & Range. Using a Level 2 charging station with a J1772 connector, the charge time is as little as 2 hours and 8 hours with a standard 110v wall outlet for a completely depleted pack. Using a Lithium Ion Polymer, LiPo battery pack, the Lightning should give you an average of 70 mph with more than a 100-mile range.

The monocoque Lightning will use battery and motor as the main stressed members of the chassis. According to Richard the liquid-cooled IPM motor is what GM uses for its Tahoe SUV hybrid. If it can push a 6000 lbs pound truck, it will be even more fun on a 500 lbs motorcycle. And to those naysayers who still yap about longevity, the electric motor is certified 900,000 miles.

The world of electric motorcycle is in complete effervescence, shaking up conventions and building a new form of electric vehicle racing that should provide entertainment for years to come. Lightning has worked hard over the past few years to produce a race winning electric motorcycle, which will now be accompanied by a street version that promises high-adrenaline fun.

hondaow wrote on August 27, 2012 - 3:36pm Permalink
Yet another article about elec. Bike with no pricing information! Bad journalism!
Nicolas Zart wrote on August 31, 2012 - 1:53pm Permalink
Would you rather I pull a price out of my magic trick hat from thin air? Sorry, there was no price at the time of publishing. Bad Commentarism!