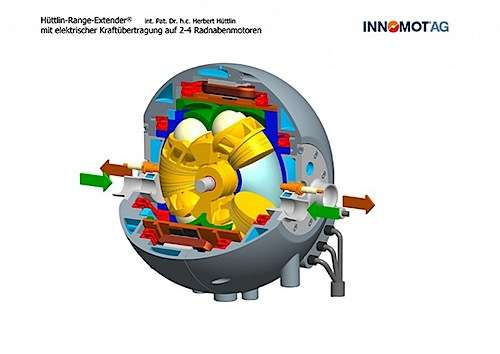 The new hybrid Hüttlin Kugelmotor could extend the life of internal gas engine, making it a perfect fit for future plug-in hybrids and other extended range-like vehicles.
Advertisement

The Hüttlin Kugelmotor has have arrived and if you haven’t heard about, you’re not the only one. The little, compact and highly unorthodox internal combustion fits somewhere between a Wankel rotary engine and a more tradition piston system. In a nutshell, it’s two sets of opposing pistons, following a sine wave shaft, spinning a cam turning a rotor inside a stator.

Das Hüttlin Kugelmotor. What is it, who did it, what are you talking about? The Hüttlin Kugelmotor motor is an inventive take on what a more efficient internal combustion should look like. By radically moving away from traditional pistons, it uses two pairs of opposite pistons spinning around a crack. In some ways, it looks like a rotary engine but it still has pistons. The rotating pistons spin around a rotor, thus bridging a gasoline piston engine and an electric motor. Confused yet?

Technically Speaking. This hybrid engine, part of an electric motor is brilliant in many ways. By using a pair of opposing curved pistons spinning on a bearing, the two heads are pushed apart pushing the opposite pistons together. So far, this sounds like a normal internal combustion engine. Based on a four-stroke cycle, each of the piston heads is enclosed in a titanium ball bearing inside a circular axis shaped like a sine wave of sorts, making it a rotor. The other fixed circular axis that houses permanent magnets is the stator and when the pistons spin, you have electricity.

Since describing it is more difficult than words can convey, here’s a video of how it works.

Applications And More. The applications for such a hybrid engine are wide. First, it can be used solely as a generator with regenerating braking capacity with pistons that disengage allowing to recoup the energy back into electricity. Another interesting use would be for the pistons to be used as compressors when braking.

Dr Herbert Hüttlin who has been working the past 23 years on improving engine designs has certainly shown us that complicated can be simple, and vice-versa. According to GizMag, the hybrid engine already shows promising figures. A working 1.2L is already giving 100hp or 74kW at 3000rpm with a torque of 213ft-lb, or 290Nm. Weighing at a mere 137 lbs, 62 kg, it only has 62 parts compared the average 240 for a traditional engine. Dr Hüttlin believes efficiency can further increase by 40% by reducing friction.

While there is no silver bullet when it comes to internal combustion, human ingenuity knows no bound in squeezing more efficiency from a quirky design. What is important here is the small space the engine can be fitted in, as well as being light with a fairly high output. This is a true hybrid engine. But it will be interesting to see how Dr. Hüttlin figures out the friction constraints on this unique Hüttlin Kugelmotor hybrid motor.