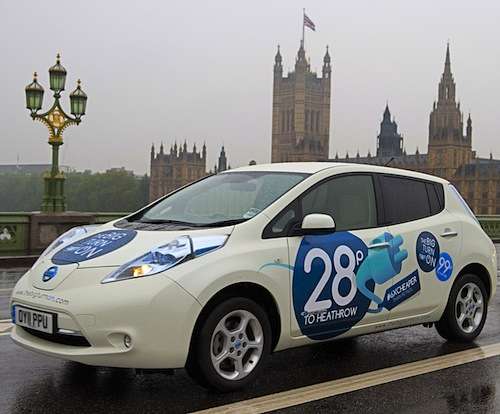 How To Get People Into Electric Cars

To the puzzling questions of how to get more people to try electric cars, the answers are many and simple.
Advertisement

How about giving them free rides? They will experience the fun wheeze of the electric drive. They will hear how quiet they are and might even forget they are inside a car at a red light. The city of London and Nissan have partnered to give Londoners free taxi rides in the company’s Leaf.

Free Electric Taxi. A few taxi drivers from London traded their gasoline and diesel taxis for an electric Nissan LEAF and assumed regular duties this past weekend. The no-emission Nissan LEAFs moved people in the city from 10am to 6pm on Saturday and Sunday, offering free taxi rides. All people had to do for a ride was to send a Tweet with a hashtag along with their chosen destination. This was an opportunity for Nissan to gather information and consumer feedback on an upcoming electric taxi.

Part of an ambitious campaign called 'The Big Turn On' aimed at spreading the EV message via social media channels, the idea is to get one million consumers switched onto electric driving in just 100 days, which was achieved on the 20th June, 18 days ahead its original target. The campaign plays on the fact that an EV is in average six times cheaper to use in the city than a conventional gasoline car.

London To Heahtrow. London to Heathrow Airport costs the LEAF driver a about 85 cents in electricity whereas a gasoline powered taxi would run you $2.6 in fuel. The savings are not only substantial but could help relieve gridlocked congested London by enabling cheaper taxi rides. Besides the obvious savings, the zero emissions is dear to London. The city is eager to become the electric car capital of Europe and the Nissan LEAF is exempt from the city’s congestion charge with no annual vehicle excise duty.

According to Jim Wright, Managing Director of Nissan GB: "This is part of a campaign designed to get people to turn on to 100% electric driving by busting many of the myths and highlighting the many benefits of electric cars, including incredibly low fuel costs. By offering free taxi rides, we aim to show hundreds of people just how practical and affordable the Nissan LEAF is to run. As each journey costs us so little, we're not charging passengers - there's no point quibbling over a few pence."

The fleet of Nissan Leafs had their very own 'taxi rank' at the Truman Brewery, near Liverpool St Station where they were giving free rides to destinations across London.

This is a great way for people to experience an electric car, especially where it reigns supreme, in city traffic. As for the Nissan Leaf free taxi experience this weekend in London, we can only hope the idea will spread around the world.

Frank Sherosky wrote on June 26, 2012 - 10:42pm Permalink
There seems to be a misconception out there that folks just don't understand EVs. Frankly, I think they do. And the best way to get people into them is based more on pure economics. First things first! Make these cars affordable for the masses. In other words, build an EV that is comparable in size relative to the average car, comparable in driving range, but more important at an affordable price, and the public will buy them.
Nicolas Zart wrote on June 27, 2012 - 6:45am Permalink
You're right and what it boils down is what can people afford. Since the current state of technology and how cheap it can be made available is what it is, I think EV makers should just focus on where they make most sense, urban city driving. I'm not sure if people have a correct understanding of electric cars but in general the media spins "range anxiety" and expensive more so than overall operating costs and such. In the end, EVs make more sense in cities than on highways, at least for now.