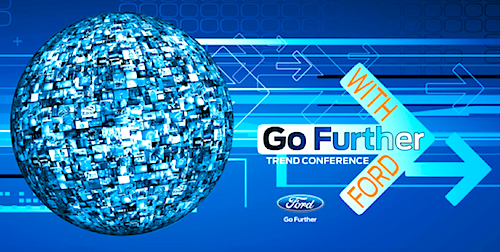 While carmakers struggle to turn a profit at any cost, many fail to see what gets people out to buy cars. Ford reminds us it that automobiles are more than moving vehicles, they are accessibility platforms.
Advertisement

When you write about carmakers, the hardest thing to do is to be objective. By nature we are attracted to certain cars and repulsed by others. When writing about carmakers, being impartial is tricky. Press releases and marketing can often take us on a trip to fantasy land and leave us wondering how much of it is fluff. As much as I felt Ford really understood its mistakes and was working on recapturing what it does best, I wondered how much of it was really true.

Ford Goes Further. Ford differentiates itself from its local competition in many ways but the one they hail is that they are more than a car manufacturing behemoth, it’s a family car company. The differences are subtle and judging by the few days I spent in Dearborn listening to its presentation, talking to its employees and people from around Detroit, Ford has a very positive image there.

What surprised me was the human aspect of the car company. Redefining its car process from a mobility company to an accessibility one is ahead of its competition. According to Bill Ford, Henry Ford was interested in humanistic quests. The company lend a helping hand in Africa at the beginning of the AIDS epidemic and other catastrophes around the world. But more so, the original Ford was interested in alternative energies and fabrics. You might also remember Henry Ford taking a sledge hammer to a bumper made out of soy bean.

What took me by surprise was to see how Ford is thinking outside the box when it comes to urbanization. The car company knows there is no single and unique solution but just wants be part of the solution. That is healthy way of looking at the world and a fresh relief from the haughty messages from other car manufacturers. In an oversea pilot, Ford is using some of its cars in Chennai, India linked to the cloud where hospitals can reach pregnant women in time to be diagnosed. With a live connection, the far away doctor can make an early assessment, which has already saved a few lives so far.

Ford’s Go Further event also marks the radical departure from the traditional automobile news industry invitation to journalists. The fact is that we, car writers were the minority in a sea of Mom bloggers, fashion evangelists and this incredible new generation of lifestyle writers. In other words, Ford gets it that a car is more than a car, their cars are a lifestyle onto their own. Ford is betting on a more organic, and may I say cheaper marketing campaign of letting a new crowd spread the message. It’s a fundamental paradigm shift in marketing.

I will synthesize the fundamentals of this incredible events, from driving the latest Mustangs and Police Interceptors on tracks to checking out the wind tunnels, to talks with prototype full scale model creators and color coordinators. Yes, at once point I even found myself thinking I could leave sunny southern California and work in Dearborn Michigan for Ford at this Go Further event.

Tsingshan's Threat to Tesla: EV Maker Is In Battery Crosshairs
Tesla-Funded Research Reveals One of The Biggest Mysteries of EV Battery
END_OF_DOCUMENT_TOKEN_TO_BE_REPLACED