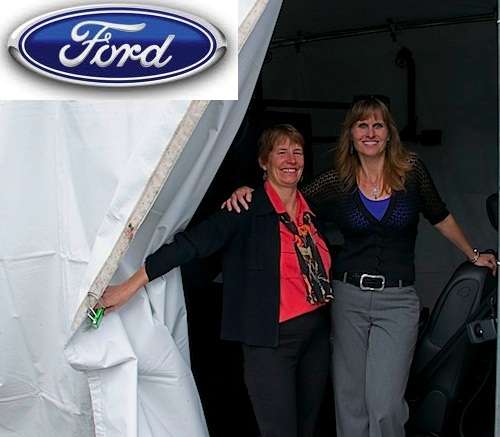 After a breakfast meeting with three highly passionate Ford women engineers, it was obvious what these ladies had to offer, another angle most male engineers cannot grasp.
Advertisement

Ford is reaching out. I met with some of the ladies behind the engineering at Ford. It was casual, open and frank, much as what we’ve come to expect from Ford. You see Ford gets it and has been on an intelligent offensive a few years ago to open dialogue and get up close to its clientele. Still, some of the best talks are with the engineers who don on futuristic goggles and other high-tech gizmo that make up this new automobile industry, and this as soon as they get to work. What a life!

It’s All In The Voice. Meeting Laura Burek, the core voice control technology engineer behind Ford’s famous Sync system was fascinating. This young lady fresh out of college struck the ultimate job working for Ford to start the voice recognition revolution in the automobile industry. Considering this enormous task, I was surprised to find only three people head the entire department. Laura’s work involves fitting Microsoft’s voice recognition technology into an automobile. No small task, I can assure you. The latest update to the Sync software is out with improvements. It now understands a few thousand words moving into natural speech recognition, a la Siri.

Microsoft, Why Not Apple? I had to ask why Microsoft and not Apple? Before you lynch me on the pole of the almighty MS totem, I always felt Apple delivers a better out of the box user experience. When I asked Laura, it seemed Microsoft had an earlier start in voice recognition then Apple. It would make little sense starting from scratch with Siri, although I’d be a happy beta tester.

A Woman’s Ergonomic Touch. We spend hours using tools and technology without thinking about the ergonomic and Allison Stephens, Ford’s ergonomics technical Specialist is in charge of that. Every morning, she dons on a pair of 3d goggles and sees Ford’s latest concept on her simulation platform.

How does it feel? Imagine seeing a car in its entirety, behind the dashboard, into air vents, beyond hidden wires? Allison is also a compassionate engineer who designs production chain platforms, making sure assembly line technicians do it in an ergonomic way. On the spot she can remodel where an access panel is, how big or off center it should be so that it is easy accessing it. Allison has to take into consideration from tall people, to shorter bodies, big and small. All this hands have to access the same panels in as an efficiently manner as possible. Another important aspect of 3d is you can make for vehicle adjustments quickly. For instance, how to accommodate drivers by placing the rearview mirror in the right place, or the gear selector falling easily into hand. Overall, she makes sure the car comfortable enough to take you on long rides.

Virtual Reality In The Automobile Industry. Elizabeth Barron, Ford’s virtual reality and advanced visualization technical Specialist is in charge of 3d that reflects reality. Elizabeth makes sure the virtual reality simulates properly the concept phase in order to facilitate the task of tweaking anything to meet demands.

Why Is Virtual Reality So Important? Virtual environment work has serious benefits, such as shaving off over a year of the average 5 spent creating a car. This means that bypassing the concept mock up phase, a virtual environment allows tweaks with a few clicks and buttons. It also does eliminates the fatigue problems at the assembly line. Imagine a person plugging in the same hard and difficult cable connection all day. The results at the end of that day won’t be as good as in the morning. Designing connectors and plugs the assembly technician effortlessly works with throughout the day boosts quality.

All in all, I was impressed to see these women engineers solving life’s driving challenges. What impressed me most was that in a world primarily dominated by men, these women add a touch of humanity and as Allison rightly worded “compassionate engineering” so that our backs, shoulder and all around comfort was taken into account. Obviously, most guys are interested in the mechanic aspect of the automobile. We’d sit on a crate to drive the greatest car in the world. What the women engineers at Ford bring is a much needed touch of compassionate engineering.