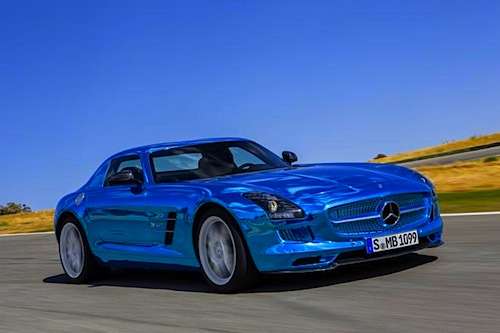 After a few years of a rumored electric AMG, Mercedes Benz is delivering. You could see it if you were at the Paris Auto Show.
Advertisement

Le Mondial de l’Automobile, the Paris Auto Show is showcasing some promising electric cars, EV and plug-in hybrids, PHEV this year but the star of the show might just be 2014 Mercedes Benz SLS AMG Electric roadster.

From Promise To Reality? While Mercedes Benz has only taunted us with a few prototypes over the past 2 years, the company seems ready for the launch the final electric version of its SLS AMG gullwing supercar by the end of 2013. From the SLS AMG E-Cell to the now Mercedes Benz SLS AMG Electric Drive, the car might not look much different on the outside.

Technically Speaking. Mercedes Benz can here claim the title of the fastest and most powerful almost-production electric car, period. With no less than 740 HP and 737 lb-ft of torque, this is Mercedes’ answer to Porsche’s amazing 918 hybrid. The 0 to 60 mph is achieved in a sprightly manner, less than 3.9 seconds and its electronically limited top speed is capped at 155 mph. Not only is the SLS AMG Electric Drive the most powerful electric car soon-to-be-released, but it is also the fastest.

Shoving 60 kWh of batteries in a sports roadster means the SLS AMG Electric Drive battery pack weighs in at over 1,200 pounds with a range close to 150 miles in mixed driving. As far as how long it takes to charge this beast, 20 hours using an ordinary 110V household outlet if you were to test your patience, and much less if you have a handy dryer 220V outlet. But don’t worry, Mercedes plans to offer a quick-charge option.

The real trick for the SLS AMG Electric Drive is it packs 4 in-hub motors, located in each wheel with constantly controlled torque power distribution through the company’s new AMG Torque Dynamics system developed together with engineers from the Mercedes-AMG Formula 1 team using their extensive KERS experience. Mercedes says the vehicle should handle much better than its gasoline counterparts.

Handling Promises. In typical German fashion for high-end cars, chassis is a full carbon fiber monocoque, which yields a 30% weight gain over standard aluminum and gives a much higher strength, you guessed, at a much higher price. In the handling department, Mercedes has also put a lot of work. With pushrod shocks replacing the gasoline version, the electric drive system is closer to a sports race suspension setup generously helped with carbon ceramic brakes.

And now for the moment you’ve been all waiting for, how much. $536,000 and no word yet on a US launch. In the meantime, it’s interesting to see Mercedes come back with the Uber electric car, the Mercedes Benz SLS AMG Electric Drive.