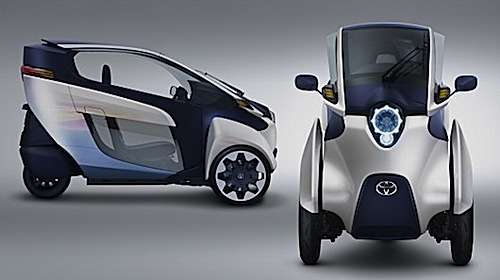 An Electric Toyota OK But When?

Toyota’s battery message can leave you baffled despite actual market condition. Yet the company is still looking into distant battery technology.
Advertisement

Toyota has made it clear throughout the “EV revolution” that lithium was not as feasible as the Nickel-Metal Hydrate batteries it used on its original RAV4 EV series. Even if the Japanese carmaker stays put producing one hybrid after another while others have boldly offered plug-in hybrids (PHEV) and some even as far as pure electric, Toyota hasn’t. However, on its global site, and according to Long Tail Pipe, you find an interesting Toyota tidbit on its battery roadmap.

Toyota’s “Technology Not There” Message. The first part of the leitmotiv against pure electric cars is that the technology isn’t there. This is akin to looking only at a sliver of a segment of the electric car market, such as entry level electric cars with low range and base your results on it. It partial and inaccurate. However, once we consider an interesting Californian startup, you guessed it Tesla Motors, then we get a contradicting surprise to Toyota’s message. Their electric cars can go 240 miles! See my article: Why Tesla Motors Electric Cars Are So Great, where I go into details about the fundamental differences between Tesla and mainstream carmakers when it comes to electric car battery designing, or not. To add to the humor, Tesla Motors designed the electric drivetrain of the new RAV4 EV Toyota has available in some parts of the country.

Customers Not Ready. The other excuse is that the clientele just isn’t ready. In other words, there is no market demand for pure electric cars. If that was true then it couldn’t explain the company’s rather enthusiastic sales numbers of the plug-in hybrid version of its Prius it launched quietly. In fact, it was a quiet surprise to see how it sold out quickly and took a big chunk of Toyota’s “hybrid” sales last year around the same time.

Battery Chemistry. In the end, the Achille Heel is still the same, weight versus performance. You can only shove so many batteries in an electric car until it becomes useless. You need to find the right balance between enough energy for the amount of performance desired and energy efficiency over weight. Interestingly enough a quick peek on Toyota’s global site reveals an interesting fact. Toyota doesn’t see feasibility with today’s lithium-ion batteries today maybe but it has posted two taletelling signs of where its attention is.

Toyota has set goals and leans toward Metal-Air battery and even later, all-solid state. These two facts answer where Toyota is going and seriously it is with a pure electric car. In this case, we are looking at a few years down the road. Last time I spoke to the IBM head of research for the lithium-air system, he told me it was technically ready in lab environment but the biggest problem is keeping the humidity out from coming into the battery. This in reality is tricker than it looks and certainly a bigger obstacle than developing other lithium chemistries.

Toyota is a pragmatic car company and rarely strays off the beaten path. After almost a decade of selling hybrids, it has been making a profit for only a few years. Carmakers know one thing and know it well, the balance is in striking a positive image while maintaining financial health. If Toyota, amongst a few others have booed the idea of pure electric cars, it doesn’t mean they are not investigating them. When the market is looking into using electric motors to help is eternally inefficient internal combustion engine, you must pay attention. Toyota has fixed two goals and decided upon Metal-Air battery and later all-solid state.

Waterloo wrote on March 15, 2013 - 2:50pm Permalink
I would think twice before accusing Toyota of holding off on building an EV. Toyota where the first to win a motor race in a hybrid with the Supra HV-R and run the most successful (non-flywheel) hybrid race car ever the TS030. They are leading the field in magnesium-ion batteries . And if you really what a RAV4 EV you can import one like every Mustang in Europe is.
Nicolas Zart wrote on March 16, 2013 - 9:15am Permalink
Hi Waterloo, I'm not accusing Toyota of anything. It's a pragmatic company that owes it to itself to stay alive. But the cases you mention above are all hybrids, which again fits what the article talks about, Toyota will most likely not come out with a mass produced EV until it has reached its energy density goal, which looks like it would be a few years away from now. Thanks for your comment, Nicolas