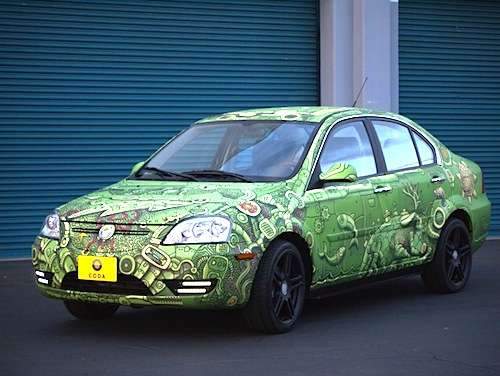 Can you guess who isn’t too happy about how electric cars are sold? If you guessed dealership, you’re right.
Advertisement

It must be uncomfortable for many dealerships seeing this new wave of odd vehicles coming our way when all they have ever seen were gasoline cars with planned obsolescence and routine maintenance checks, assuring them a healthy living. Electric cars not only do away with 90% of so-called “routine maintenance” checks but are increasingly sold more and more through the company directly. This is challenging the traditional middlemen sales route.

Dealerships Have A Golden Opportunity. Come on let’s face, car dealers and dealerships don’t enjoy the best reputation. A few rotten apples pushy salespeople have given them this image. It’s too bad because dealerships stand to gain a great advantage by jumping in early into the electric car craze.

CODA And Tesla. These two electric car startups, CODA and Tesla Motors are shaking the way things are done. Not only they offer some of the highest range electric cars but they also take on the sales procedure directly. After all, which dealership would accept to sale an relatively new carmaker and at that, a new technology? That’s why Tesla Motors announced it will focus more and more on direct internet sales.

Car Manufacturers Take A Clue. To be fair, some carmakers are also listening to what the new generations want and a walk down a busy and pushy sales dealership isn’t one of the things they’d rather do. Root canal might be a better alternative. Ford is taking pre-orders, as well as Mitsubishi and other makers, as well as custom based features but the last leg still happens at dealerships. At the very least, you won’t have to suffer an over zealous salesman pushing the wrong car in your hands to boost their revenues.

The New Age EV Sales. A new technology pushes new and strategic ways of selling something not clearly understood by many. BMW iStores, which we wrote about here: BMW Takes on Apple Store with it's BMW i Store and Audi’s new Metropolis Cyberstore is yet another solution some more mainstream manufacturers have found. See our: What Audi's Metropolis Cyberstore Means In London.

Is the EV Community Taking Its Lessons Form Apple? Maybe the leader of this new strategy is none other than Apple. Known for fearlessly grabbing control at every stage of the manufacturing process it aims to deliver what its calls the best possible user experience. This strategy has worked well for Apple and its product certainly reflect a higher quality than its competition but can this work for carmakers?

The best way to find out is to see how electric car startups will do in the near future. At this stage of the game, Tesla selling directly to its clientele makes sense, and CODA should find the same strategy work. What might be harder to implement is for more mainstream automakers to sell either directly to customers their electric cars over the internet or through stores, a la Tesla Motors.

Anonymous wrote on September 6, 2012 - 7:24pm Permalink
This is the first 'tell it like it is' story dedicated to a big reason EV sales are slow. The Mitsubishi sales manager for Southern California addressed the San Diego Electric Automobile Association (EVoSD) and stated that his major problem was convincing the dealers to sell the EV. He mentioned that he tried to explain that service income would continue, because 'every electric car buyer would have to return to the dealership every 35,000 miles to purchase an air filter.' He did say it did not help much. Al of San Diego
Nicolas Zart wrote on September 6, 2012 - 8:32pm Permalink
LOL, that is the elephant in the room if ever there was one. Thanks for the comment. Yes, I think some smart dealerships will find a ways to be financially solvent selling electric cars. In the meantime, this weeds out the bad business models.