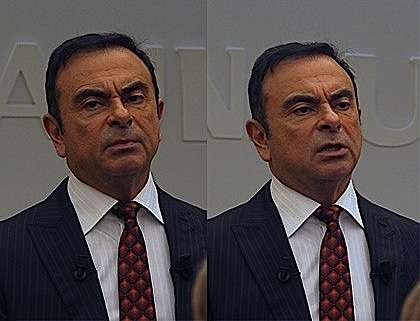 Carlos Ghosn sees even more electric car in the future. He hints at the strategy at the Geneva Auto Show
Advertisement

Speaking at the Geneva Auto Show, Carlos Ghosn, CEO of the Nissan-Renault Alliance said that he foresees a future with more electric cars to come. If the global total sum of electric cars sold from both companies adds up to 70,000, more is indeed something we would all want to see. So how will Nissan do it?

First Kid On The Block. Yes, Tesla is cool. Yes, Coda is intriguing. Yes, the Volt gets a lot of attention but the one who started all of this and beat everyone to the market was Nissan with its all-electric LEAF. Not only was the LEAF first to the market but Nissan had also done its homework very well. You see Nissan had built around the LEAF a complete infrastructure with 24/7 technical access, apps and remote operations anticipating its electric driver’s experience, as much as possible while using data to tweak settings. The electric car user experience was extremely well thought, even if it was after all the first new electric car (EV) back on the market.

After The Early Adopter Wave, Nothing. Where things took a turn for the strange is after a relentless two years of hearing about the LEAF, introducing it, unveiling it, so on, so forth, Nissan’s juggernaut PR and marketing arm shut down without so much as a hush. Nissan sold its LEAF and all attention went to the Volt, with GM’s equally powerful and impressive PR and marketing departments. Soon after, a problem lands on Nissan’s lap, that of overheating batteries in the torrid hot Arizonian summer days, which to the company’s discredit, it handles poorly and tries to wait it out.

If a blemish on the EV track world is something to worry about at this stage of the adoption curve, every carmaker owes to itself, the industry and flourishing economy to do its best to handle quickly anything relating to newer technologies being introduced to the market.

Ghosn & The Geneva Auto Show. The newer LEAF has a few updates, but the genius is in offering different versions, thus opening a new door to electric car aficionado in a more affordable way. Ghosn feels the electric car landscape is changing but the breakthrough will come from China. This makes sense as major carmakers are finding ways to get a foothold in this new market. The Nissan electric car strategy is simple, be ready to sell plug-in vehicles when customers are ready to buy them. And the results are not bad considering both companies sold 70,000 electric cars already to date.

It makes you wonder if the Nissan Renault Alliance ever thought about importing those nice little Renault electric cars that have fast onboard chargers and pretty good performance. At least, with Nissan and Renault, we have two carmakers working together to further the electric car adoption rate.