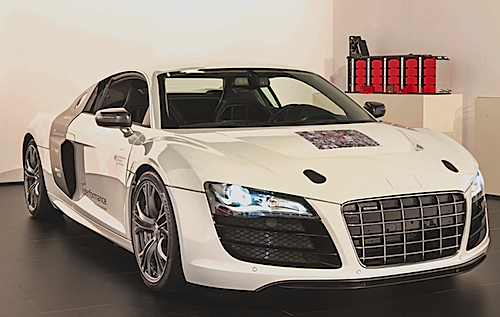 Audi has finally unveiled its first all-electric F12 ‘e Sport’ based on the R8 platform. So what does it have to say?
Advertisement

Basically, Audi is still working on how to use its irresistible R8 platform for a high-performance electric drive. The German carmaker unveiled the first vehicle as a result from its “e performance research project” that has just been concluded after a 3 year stint. And what a difference 3 years make, after €36-million, $47-million that gave birth to 20 degree theses and 50 doctoral theses, via GreenCarCongress. And according to Gizmag, Bosch and a few institutes at the RWTH Aachen University collaborated on the project to develop a scalable electric vehicle technology platform that would serve as the basis for a variety of electric-powered vehicles. Sounds familiar? That’s because Audi already told us this back in 2009. So what’s new? The F12 results could work from compact city cars to sedans to sports cars and is based on the R8, which is loosely related to the e-tron line up of cars.

Technically Speaking. Using no less than three separate electric motors as we had reported a few years back, each is individually controlled for increased stability. The synchronous front axle motor works only at slow speeds and the two optimized performance asynchronous motors at the rear axle add extra horsepower and needed torque when higher speeds demand it. The front synchronous motor delivers 50 kW with 133 lb ft at the front axle and the two independent 50 kW, 132.76 ft lb asynchronous motors at the rear axle. All in all, the three motors produce a total of 150 kW, 204 hp but with 405.66 lb-ft of torque. This begs to question if whether or not the Audi e Sport is a fully electric Quattro or a Trio Plus?

On the ingenious side of things, the F12 ‘e Sport’ is powered by two separate battery packs conveniently located to perfectly balance that car’s handling dynamic. Each pack use 200 “macrocells” for an overall capacity of over 38 kWh. The whole system can deliver output voltages varying from 144 or 216 volts using a DC/DC converter. But in order to maximize efficiency, the voltage is kept at around 200 volts for normal driving, although if needed, as much as 440 volts are available if your right foot decides to floor it.

Security. Battery pack security has grown in leaps and bounds over the past decade and Audi chose to use cast aluminum sections designed for absorbing shocks. To add to this, beveled walls have been designed in the two battery packs to allow the battery cells to adjust to shock in the event of an accident. Much as BMW’s daring use of light and sturdy exotic materials, Audi uses technologies it has developed with the research, such as the carbon fiber reinforced polymer, or better known as CFRP to envelop the rear battery.

Thermal Management. The current holy Grail of electric battery operated vehicles is not battery chemistry choice but battery temperature management. As such, Audi chose to regulated its battery heat via a pump that also manages the interior of the vehicle. The system is well design and can use the battery heat to heat the inside of the car, thus lowering the overall use of energy.

Who’s Catching Up With Whom? And herein astute readers will look at the specs and wonder why the performance is below that of a Tesla when the price could very well be above it. Audi also understands that the potential success of electric cars, EV depends on manufacturing light and sturdy materials at an affordable price. Like BMW, it too will have to find ways to make such weight saving materials affordable. Still, one has to wonder, is Audi playing catch up to Mercedes and BMW, or is Mercedes playing catch with BMW and Audi? See our previous BMW article here: BMW Turns On The Infrared Heating and AMG’s electric SLS, The Fastest Most Powerful AMG Electric Drive here.

Nonetheless, even if Audi falls short of Tesla performance, it is a good thing to see the German car maker who once said there was no future in electric cars work on the such a project. We can only hope Audi will give us performance the F12 ‘e Sport’ deserves at an unbeatable price.