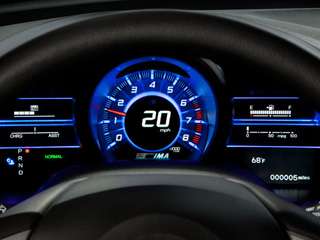 The Honda CR-Z is in a different hybrid world than most others. Find out what next year’s version has in store for you.
Advertisement

The Honda CR-Z is an odd ball in the hybrid world that defies conventional logic that a hybrid system is made to be more fuel efficient. Instead Honda uses it for more performance without sacrificing fuel consumption. In many ways, the CR-Z answers the needs and desires of a tiny niche market. The new 2013 Honda CR-Z hosts many upgrades, such as reworked its powertrain, touched up the styling, amongst a few other things.

Technically Speaking. The fun part is in the powertrain, which receives a unique variation of Honda's original Integrated Motor Assist, IMA technology. Using its 1.5L 4 cylinder, 16-valve, single-overhead cam engine with its Variable Valve Timing and Lift Electronic Control, i-VTEC, the CR-Z receives an additional power boost from the DC brushless electric motor. What makes the CR-Z hybrid so different than other hybrids on the market is that the electric motor assists in acceleration, as well as acts as a generator when braking or coasting to capture kinetic energy, recharging the Lithium-Ion battery pack, otherwise known as regenerative braking. Equipped with a stop/start system, the gasoline engine can start on steep inclines from a standstill with the manual transmission with its hill start assist system that temporarily prevents the vehicle from rolling backwards.

The 2013 version boosts power from 10 kW to 15 kW, due to higher voltage 144-volt Lithium-Ion battery pack. The CR-Z now delivers a combined peak output of 130 hp at 6000 rpm and 140 lb-ft. of torque, 127 lb-ft. on CVT-equipped models. That’s 8% more horsepower and 12 lb-ft of torque, 4 lb-ft on CVT equipped models. Manual-transmission versions also receive both a larger clutch and a new lower final drive ratio. As far as fuel economy, the 2013 Honda CR-Z delivers 36/39/37 mpg, while the 6-speed manual transmission gets 31/38/34. Yes, we are far away from the original 52 MPG Civic but those extra safety features and commodities do add up on the scale.

On The Surface. As far as styling, the upgrades include a revised interior trim as well as a new front fascia. There is a new finish for the 16-inch alloy wheels and an aerodynamically functional new rear diffuser adds a more aggressive touch. The CR-Z comes with two new exterior colors, Passion Berry Pearl (don’t ask, just go see) and Polished Metal Metallic.

All of this usually means a hefty price increase as has been so fashionable these past decades, but it seems as if Honda is taking a cue from Apple. Offer a better next generation with more power at the same price. The 2013 Honda CR-Z starts out at $19,9751 with two models available, the base CR-Z and the step above, the CR-Z EX. A six-speed manual transmission is standard equipment and an automatic Continuously Variable Transmission (CVT) is available. The up-level CR-Z EX adds Auto-On/Off High-Intensity Discharge (HID) Headlights, LED daytime running lights (DRL), a 360-Watt AM/FM/CD Premium Audio System with seven speakers including subwoofer, perforated leather-wrapped steering wheel, and more. The CR-Z EX is also available with the Honda Satellite-Linked Navigation System™2 with FM traffic and voice recognition, Pandora® Interface and an SMS text messaging function.

Honda is sitting on an opportunity to once again shine with its CR-Z and show the world hybrids are not for sissies. The 2013 Honda CR-Z should prove interesting to test drive this week.

danwat1234 wrote on December 2, 2012 - 3:58am Permalink
"What makes the CR-Z hybrid so different than other hybrids on the market is that the electric motor assists in acceleration, as well as acts as a generator when braking or coasting to capture kinetic energy, recharging the Lithium-Ion battery pack, otherwise known as regenerative braking." Uh that is standard behavior for any hybrid on the market. ------------ Honda says the 0-60 time has dropped from 9.7 seconds to 9 seconds for the 2013 car. I wonder if that is with the Sport+ mode engaged. The CRZ still lacks in efficiency due to just having a regular OTTO cycle engine, not an Atkinson cycle engine like what the competition has. Direct injection isn't all that necessary, the Prius is just multiport fuel injected. The CRZ lacks in power because it is (mostly/completely) a parallel hybrid, meaning a mild hybrid. The electric motor can't help accelerate the car all that much unless you push that Sport+ button. Imagine if they increased the HP of the electric motor to 75HP when they refresh the drivetrains in a year or two? It is entirely possible. It'll then just be a matter if the battery can handle the power draw from that motor.
Nicolas Zart wrote on December 2, 2012 - 1:45pm Permalink
Yes, I didn't make that clear but Honda wants to use their hybrid system there for acceleration boosts and not just assistance as is the case with other hybrids. In other words, it's the same idea as what ius done if competition, when a boost is given at the moment of acceleration to overtake a another car. Its primary target isn't fuel efficiency, although that plays a big role but Hinda wanted to show what that a hybrid system can be used for performance boost. You do point in the right direction when talking about the so-so performance. I think they are finally starting to realize they have a good platform and will tweak it to develop more and more. In essence, it seems Honda finally sees this car as a way to differentiate itself from the run-of-the-mill hybrids out there. Time will tell.
danwat1234 wrote on December 2, 2012 - 3:01pm Permalink
Well said
Nicolas Zart wrote on December 2, 2012 - 3:05pm Permalink
Thanks. At first, the car didn't interest me at all. I thought Honda could do better. But now, I would like to get my hands around its steering wheels and put it through its paces.