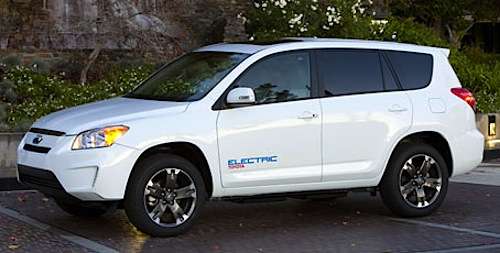 2012 has given us a noticeable increase in electric cars despite the negative twist the general insists on spewing out. What can we expect for 2013?
Advertisement

As with any technology, the introduction is timid, slow and early adopters pave the way. In the technology world, this was true of 8-track cassette tapes, then later cassette tapes, then later laser disks, CD-Roms, DVDs and BlueRay. If anybody cares to do quick search, the first recordable CD-Rom players were north of $30,000 when they were introduced. Today, they are an ubiquitous part of our life. Since we are a car news website, the same can be said about all-independent suspensions, originally only found on race cars, finally on all cars. The same can be said about seat belts, radio, AC, so on, so forth.

Toyota RAV4 EV, Back From The Dead. The 2012 Toyota RAV4 EV will virtually knock your socks off, along with your wallet. Yes, it’s a $50,000 electric SUV but it would give the Porsche and BMW equivalent some performance anxiety.

The Ford Focus EV. So what’s wrong with a single platform using different drivetrains? Nothing, according to Ford which delivers on its Power of Choice philosophy with its 2012 Ford Focus Electric that feels like a regular car and which will make anyone feel at home. No learning curve here.

Honda Fit EV. Honda is back in business with a general company wide shake up. The Honda Fit EV is a good example of what the company can do when it sets its mind to it. The car handled alright but the accelerations were impressive, especially when playing with the different power/torque driving modes.

The Tesla Model S. This is the Big Daddy of all EVs using current technology, this little Californian startup pushes a sleek looking sedan to performance levels best handled by Italians and Germans. The range is impressive starting at 160 estimated miles, and yes, close to $60,000. But you pay for quality.

CODA. The other less flashy Californian startup is CODA. CODA has done a terrific job in 6 to 5 years, going from a bunch of engineers tweaking a platform with electricity to a full-blown car structured company. In many ways, CODA has struck the right balance between price, technology and performance. But don’t look for flares on the CODA. The CODA is a discreet car that will raise more than a few eyebrows on streets.

2013 is gearing up for the introduction of more EVs.

2013 BMW i3. It’s here at last, BMW’s juggernaut launch into the electric drive has probably left Mercedes and Audi scratching their heads.

Fiat 500 EV. Yes Marchionne is moaning and complaining about how much the 500 EV will cost him but this is part of the cost for playing in the U.S. market. You need cars to satisfy our increasing demand on decreasing fuel consumption.

2013 Scion iQ EV. Another car we wrote earlier about being tested here in Southern California is the Toyota iQ, this time with an electric motor. Keep an eye on this car. It its tiny but unlike the Smart, it is wide, perfect for our Americans seats.

2014 will also show us the delivery of yesterday promise..

2014 Audi R8 e-tron EV. After taunting us with a mouth watering prototype a few years ago, Audi has also embraced the electric dance with a stunning high-performance electric car.

2014 Chevrolet Spark EV. GM finally graces us with a true electric car the Spark EV which should compete with Mitsubishi’s iMiEVs, Daimler’s Smart ForTwo EV and other smaller electric cars.

2014 Infiniti LE. What would the Leaf look like if the Infiniti brand had its way? The LE is the answer. Essentially an Infiniti revision of what the Leaf should look and act like.

2014 Tesla Model X. What do you do after a Roadster and a sedan? A crossover, and an electric one at that. The feedback has been incredible so far showing we still want big, spacious but not dump hundreds at the gasoline pump. Tesla is working for you on that one.

Maybe all of this makes more sense in the light of what the past has shown us. When we consider in 2006 only the Tesla Roadster was being mentioned, today you could feasibly go out and buy well over 10 different electric cars. And that is not including their slower NEV, neighborhood electric vehicles or even more fascinating, the onslaught of electric motorcycles that are giving regular motorcycle a run for their money. When we consider the increasing range these new electric cars have and the price war being fought, it should make us appreciate what our country has always given the world, a wide available choice of cars, this time including electric vehicles.

Thomas J. Thias wrote on November 4, 2012 - 1:32pm Permalink
Great Article On The EV NewComers- As a 2012 Volt Owner/Salesman who leases and sells this Amazing Chevy Volt EREV I welcome ALL NewComers. At 9,389 miles since my delivery March 12, 2012 I have used only 5 1/2 gallons of gas and still have 3 gallons in the tank still unused. Costs me bout a buck a day for electric, well half that as I use an out door 110/120V at my office for 3-4 hours a day! $4.00 Gas- NEVER AGAIN! ...unless I need it! lol Just wanted to point out that you missed the Late Summer 2013 MY2014 Cadillac ELR- Will Be running with the Tesla S and Fisker Karma with this Luxury EV- Best- Thomas J. Thias @AmazingChevVolt
Nicolas Zart wrote on November 4, 2012 - 9:46pm Permalink
Thanks Thomas, this was only electric cars and I will do a piece on plug-in hybrids. Yes, undeniably not paying for gasoline is something hard to put a price on.