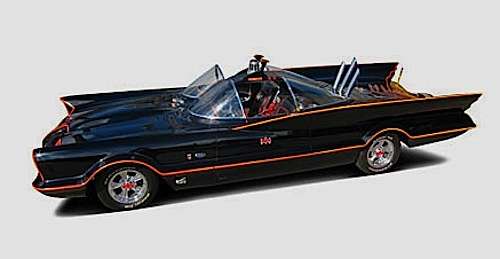 Holy cow, Batman, someone bought our Batmobile. Find out how much this American TV series icon went for on the Barrett-Jackson auction block.
Advertisement

“Holy Batmobile, Batman, someone paid $4,260,000 for our car!” Robin could have told Batman. In 1955, the Lincoln division of Ford Motor Company designed a concept car called the Lincoln Futura. This The 19-foot long, two-seat, bubble-topped grand touring car prototype was built by hand in Turin, Italy for the lump sum of $250,000. If the car never made it to production, somewhere in the mid 1960s George Barris of Barris Kustom City acquired the car for $1 directly from Ford. With 15 days to design the Batmobile and a small $15,000 budget, Barris transformed it. The car later became an icon eternally etched in the minds of TV viewers with the 1965 Batman TV series.

KAPOW, There’s A Hole In My Wallet! No doubt about it, provenance fetches high prices these days with $4,248,500 above estimates for the Batmobile. According to the 42nd annual Barrett-Jackson auction in Scottsdale, the 1966 Batmobile set the world record for the highest price ever fetched for a TV/Movie car ever. In fact, the previous record was Sean Connery’s "Goldfinger" Aston Martin DB5 which took in $4,608,500 in 2010. Essentially, the Batmobile beat it a mere $11,500.

According to Craig Jackson, Chairman and CEO of Barrett-Jackson: "The 1966 Batmobile is a true piece of Americana and fans around the world were curious to see what it would sell for. We are so proud of the record it set, but what is more important, we couldn't be happier to help find a new home for such a significant and legendary piece of TV and movie history in front of a record crowd for a Saturday auction and the SPEED TV audience.”

Technically Speaking. One of the reasons why the Batmobile fetched so much is that it still sports the original 1965 Ford Galaxy engine along with its B&M Hydro Automatic transmission. As far as the famous gadgets, the nose-mounted aluminum Cable Cutter Blade is still there, as well as the “Bat Ray Projector”, the Anti-Theft Device, and of course the Detect-a-scope, Batscope, Remote Batcomputer and Batphone, the Police Band Cut-In Switch, Bat Eye Switch, Antenna Activator, Automatic Tire Inflation Device, Emergency Bat Turn Lever, Anti-Fire Activator, Bat Smoke, and it wouldn’t complete without the Bat Photoscope.

What about the quick braking and U-turns? This was due to two rear-mounted ten-foot Deist parachutes. Other gadgets were hosted on the steering wheel, such as the push-button transmission, exterior microphones to pick up and transmit the sounds of traffic to the occupants inside, and a host of other innovative devices.

Barrett-Jackson has built a strong reputation auctioning American iron blocks favored by a sentimental Baby Boomer generation and the Batmobile fetching an astonishing $4.260,000 million is yet another testament at how well the auction company represents this era.